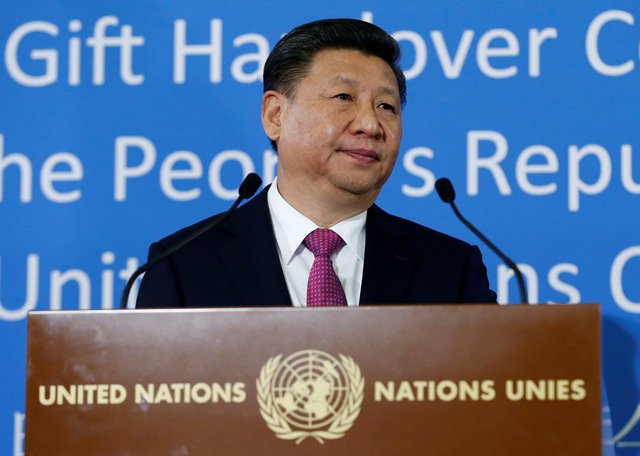 Chinese President Xi Jinping said that "China is proactively dedicated to harmonious coexistence with all countries in the world,"

By Ben Blanchard and Steve Holland

U.S. President Donald Trump agreed to honour the longstanding ‘One China’ policy during a phone call with Chinese President Xi Jinping, taking steps to improve ties after angering Beijing by talking to the leader of Taiwan.

Trump further unnerved Beijing over the self-ruled island in December saying the United States did not necessarily have to stick to the policy. The United States has acknowledged the Chinese position that there is only one China and that Taiwan is part of China.

“President Trump agreed, at the request of President Xi, to honour our ‘One China’ policy,” the statement said.

The two leaders had not spoken by telephone since Trump took office on January 20.

Diplomatic sources in Beijing say China had been nervous about Xi being left humiliated in the event a call with Trump went wrong and the details were leaked to the media.

The two sides also signalled that with the ‘One China’ issue resolved, they could have more normal relations.

“Representatives of the United States and China will engage in discussions and negotiations on various issues of mutual interest,” the statement said.

In a separate statement read out on Chinese state television, Xi said China appreciated Trump’s upholding of the ‘One China’ policy.

“I believe that the United States and China are cooperative partners, and through joint efforts we can push bilateral relations to a historic new high,” the statement cited Xi as saying.

“China is proactively dedicated to harmonious coexistence with all countries in the world,” he added.

The White House described the call as “extremely cordial” with both leaders expressing best wishes to their peoples.

China has repeatedly said it has smooth contacts with the Trump team. The Foreign Ministry in Beijing said last week the two countries were remaining “in close touch”.

That contact has been led by China’s top diplomat, State Councillor Yang Jiechi, who outranks the foreign minister.

No issue is more sensitive to Beijing than Taiwan.

The United States switched diplomatic recognition from Taiwan to China in 1979, but is also Taiwan’s biggest ally and arms supplier and is bound by legislation to help the island defend itself.

China has claimed sovereignty over Taiwan since 1949, when Mao Zedong’s Communist forces won the Chinese civil war and Chiang Kai-shek’s Nationalists fled to the island. China has vowed to bring Taiwan under its rule, by force if necessary.

There was little or no mention in either country’s statements of other contentious issues – trade and the disputed South China Sea – and neither matter has gone away.

A US official told Reuters on Thursday that a US Navy P-3 plane and a Chinese military aircraft came close to each other over the South China Sea, though the Navy believes the incident was inadvertent.

China on Friday reported an initial trade surplus of $51.35 billion for January, more than $21 billion of which was with the United States.

Trump broke the ice with Xi earlier in the week in a letter offering belated greetings for last month’s Lunar New Year, a move broadly praised by Chinese state media as a positive sign.

In a front page commentary, the overseas edition of the People’s Daily said the letter was an opening to help manage friction.

“There’s a saying in China – good food is worth waiting for.”