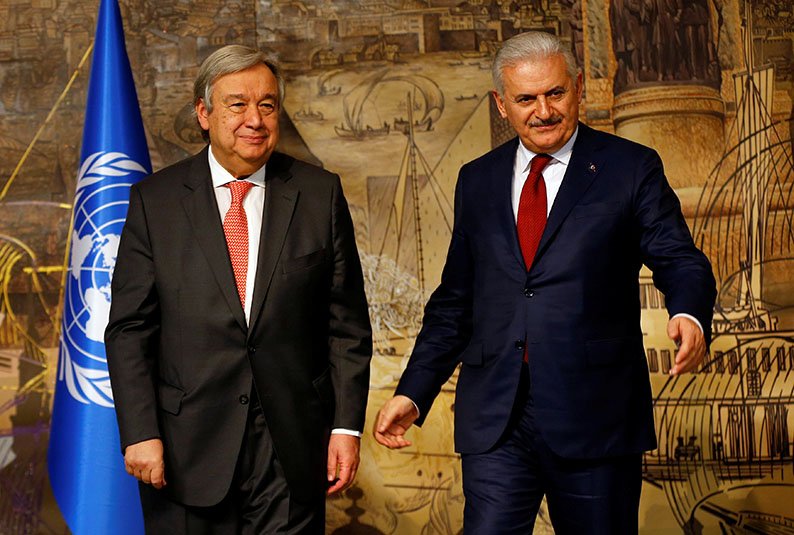 UN Secretary General Antonio Guterres said on Friday that no date has been set yet for the international conference on Cyprus in Geneva, but that he is optimistic that efforts will continue at the highest level and will enable significant progress.

Speaking during a press conference in Istanbul with Turkish Prime Minister, Binali Yildirim, Guterres, when asked about efforts to reach a settlement of the Cyprus problem, quoting the European Union’s founding father, Jean Monnet, he said, “I am neither pessimist nor optimist, I am merely determined”.

The leading role, he said, belongs to the island’s two communities and the guarantor powers.

“We have a supportive role,” he said, but he expressed determination to do the best he can to assist the conditions for a successful result.

The two leaders of both communities, he said, have weekly meetings and are making progress in relation to the outstanding issues on the internal aspects, while security and guarantees should be discussed with the guarantors.

Guterres said that the two processes are interconnected and therefore there is still no fixed date for the conference, but that the UN will continue its work to ensure that this interface will arrive at the best possible chance of success.

He said that significant progress should respond to the safety concerns of the Turkish Cypriot community and at the same time to be compatible with the concerns of the Greek Cypriots.

“We believe that it is possible to find solutions to the range of issues that are still pending and the UN will be entirely at the disposal of the two communities in Cyprus and the guarantor powers to support the search for a solution that is acceptable to everyone,” Guterres said.

In his turn, Yildirim said that as regards the Cyprus problem, Turkey has pursued a constructive approach for a positive outcome and will continue to do so. We expect that there will be a solution in which the Turkish Cypriots will feel safe, he said.

Yildirim added that the issue of security and guarantees is very important to Turkey and that the future of Turkish Cypriots must be secured, to deter any “unpleasant events”.

The fair and equal representation of each side in the new structure to be established, is also indispensable, he said.

Guterres arrived on Friday in Istanbul, which is the first leg of his trip to the region. He has had talks with Yildirim, in the presence of the delegations of both sides.

According to a Turkish official, a bilateral meeting between Guterres and Yildirim, which was scheduled to take place on Friday, was postponed for Saturday. He is also expected to meet Turkish President Recep Tayyip Erdogan.

The reason for this is, according to the Prime Minister’s office, Yildirim’s late arrival in Istanbul.

Guterres’ visit also includes Saudi Arabia, the Gulf countries and Egypt, before he heads to Germany for more meetings.

Earlier on Friday, Cyprus Government Spokesman Nikos Christodoulides had described Guterres’ visit to Turkey as ‘important’, noting that it takes place within the framework of the Secretary-General’s desire to play a more active role in the process for a Cyprus settlement and other issues of concern for the UN.