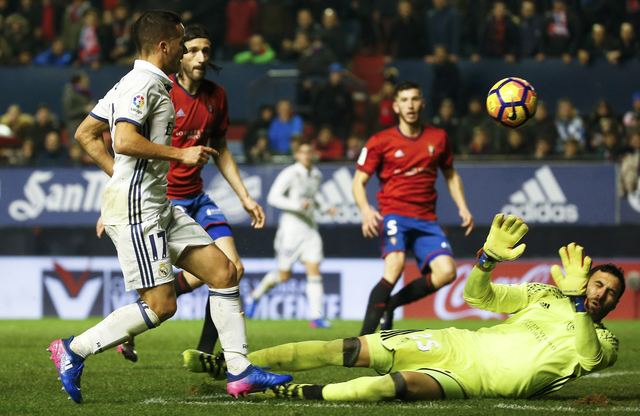 Real Madrid returned to the top of La Liga after winning a testing away clash against Osasuna 3-1 on Saturday thanks to goals from talisman Cristiano Ronaldo, midfielder Isco and substitute Lucas Vazquez.

Osasuna striker Sergio Leon cancelled out Ronaldo’s 24th-minute opener in the 33rd after defender Tano had been carried off with a sickening double leg break.

Isco restored Real’s lead in the 62nd and Zinedine Zidane’s side added a third through Vazquez with the last kick of the game.

Real goalkeeper Keylor Navas needed to produce a string of quality saves to preserve their advantage before Vazquez sealed only a second league win in seven visits to the perenniallass=”highlight”> La lass=”highlight”>Liga strugglers.

Barcelona had provisionally gone top of the table for the first time since October after Luis Suarez, Neymar and Lionel Messi scored in a 6-0 thrashing of Alaves on Saturday although the win was overshadowed by a serious injury to Aleix Vidal.

Suarez turned in a cross from Vidal in the 37th minute to give Barca the lead over the Basques, who they will meet in the King’s Cup final, and Neymar pounced on an error from goalkeeper Fernando Pacheco in the 40th.

Messi hit the ball under a hapless Pacheco for the third in the 59th minute to complete a full house for the ‘MSN’ trident, while an own goal by Alexis Ruano, a thumping strike from Ivan Rakitic and a volley by Suarez completed the rout.

The Uruguayan, who was sent off at the end of Tuesday’s 1-1 draw with Atletico Madrid which sealed Barca’s place in the King’s Cup final, move one goal ahead of Messi at the top of the league’s scoring charts with 18 strikes.

Omonia continue to misfire in stalemate with Ermis

Anorthosis alone at the top after AEL win Limassol derby