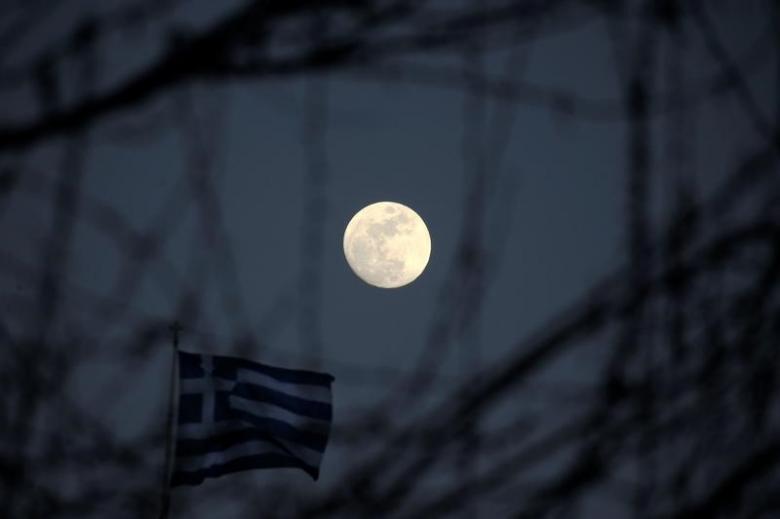 The moon rises next to a fluttering Greek national flag in Athens, Greece February 9, 2017

Germany on Monday backed Greece to stay in the eurozone and Brussels dispatched a senior official to Athens to persuade reluctant Greeks to take on further reforms to salvage its bailout accord.

It came as the European Commission forecast a large jump in economic growth for Greece of 2.7 per cent and 3.1 per cent, respectively, this year and next.

In Athens, Yannis Stournaras, Greece’s central bank chief, said a swift agreement with international lenders was crucial to keeping the Greek economy on the mend and that down the road “it may be too late”.

The future of Greece’s multi-billion euro financial aid programme is contingent on Athens concluding a second review of progress in its economic reform obligations.

But months of wrangling over changes to its labour and energy markets have been compounded by differences between the International Monetary Fund and Greece’s European lenders over fiscal targets for the crisis-hit country, now on its third international bailout.

The IMF is not party to the country’s current bailout, and says it will not partake until it has assurances Greece will be able to extricate itself from a spiral of debt.

European Commission Vice President Valdis Dombrovskis said the IMF was being too pessimistic.

“The problem is that the IMF is coming with very pessimistic growth and fiscal forecasts as regards Greece. Moreover it is not correcting those forecasts based on facts, based on the actual outcomes,” he said in Frankfurt.

A mission of experts from the lenders was expected to return to Athens this week to give their latest state of play report, EU officials said. European Commissioner for Economic and Financial Affairs Pierre Moscovici said he would travel to Athens on Wednesday to help conclude the review.

A deal would release another tranche of funds from this bailout, worth up to 86 billion euros, and facilitate Greece making a major 7.2 billion euro debt repayment this summer. But it is a process fraught with difficulty, prompting fears of a re-run of high drama in mid-2015 when Greece teetered on the verge of falling out of the euro zone.

Greece almost fell out of the eurozone two years ago as it was wracked by its debt crisis and years of lender-imposed austerity that killed economic growth and put millions out of work.

But Germany sought on Monday to say that nothing has changed in its desire to keep the eurozone intact with Greece in it.

“For years, eurozone member states, including Germany, have shown active solidarity with Greece with the goal to bring this country to a path of sustainable finances and economic growth,” Steffen Seibert told a regular government news conference.

“It is a mission that has dragged on for many years and we are holding on to it,” he added.

Foreign Ministry spokesman Martin Schaefer added: “We want to keep the eurozone whole, including Greece, and we will support everything that helps Greece. That’s why we want the aid programme to continue to be successful.”

The size of next year’s Greek primary surplus, which is the budget balance before debt-servicing costs, is a bone of contention between euro zone governments and the IMF.

The IMF believes it will be only 1.5 per cent, while the EU Commission projected on Monday it will be 3.7 per cent.

The higher the surplus and the longer it is kept the less is the need for any further debt relief to Greece.

The IMF insists Greek debt, which the Commission forecast on Monday would fall to 177.2 per cent of GDP this year from 179.7 per cent in 2016 and then decline again to 170.6 per cent in 2018, is unsustainably high and that Greece must get debt relief. Germany and several other eurozone countries say that, if Greece does all the agreed reforms, then debt relief will not be necessary.

But the discord over Greece’s economic trajectory appeared to narrow on Friday, when European and IMF lenders told Athens to make 1.8 billion euros – or 1 percent of GDP – worth of new reforms by 2018 and another 1.8 billion euros afterwards.

Blast kills at least 13 in Pakistani city of Lahore