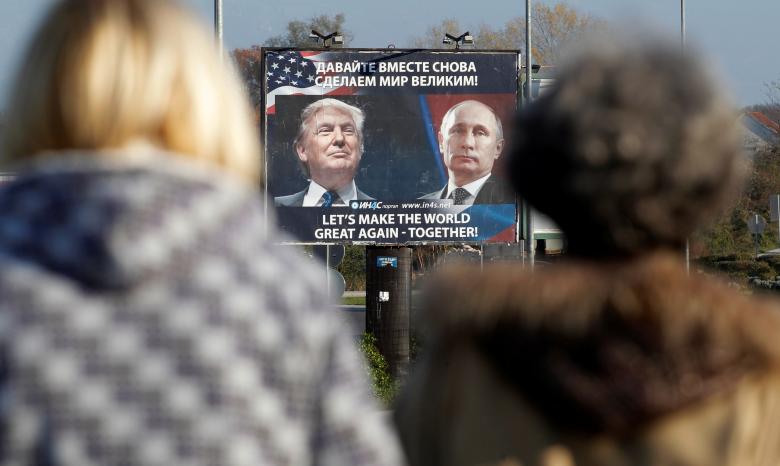 A billboard showing a pictures of US president-elect Donald Trump and Russian President Vladimir Putin is seen through pedestrians in Danilovgrad, Montenegro, November 16, 2016

The Kremlin said on Monday there was talk of a possible meeting between President Vladimir Putin and US President Donald Trump taking place before a G20 summit in July, but there was nothing specific to report so far.

The two men have never met, but both have said they want to try to mend battered US-Russia ties, which fell to their lowest level since the Cold War after Moscow’s 2014 annexation of Ukraine’s Crimea.

The new US administration is under pressure over Russia however because Michael Flynn, Trump’s national security adviser, is struggling to get past a controversy over a call he had with the Russian ambassador to the United States Sergei Kislyak before Trump took office.

Top White House officials have been reviewing over the weekend Flynn’s contacts and whether he discussed the possibility of lifting US sanctions on Russia once Trump took office, which could potentially be in violation of a law banning private citizens from engaging in foreign policy.

When asked about it on Monday, Kremlin spokesman Dmitry Peskov told a conference call with reporters that Flynn and Kislyak had not discussed lifting sanctions on Moscow.

“Obviously every ambassador informs the centre (Moscow) about all the contacts he has so the information gets to us, but we are not willing to comment on internal discussions being held in Washington,” Peskov said.

Asked if there had been talks between any Russian and US representatives on easing sanctions, Peskov said: “We have already said there have not been any (such talks)”.