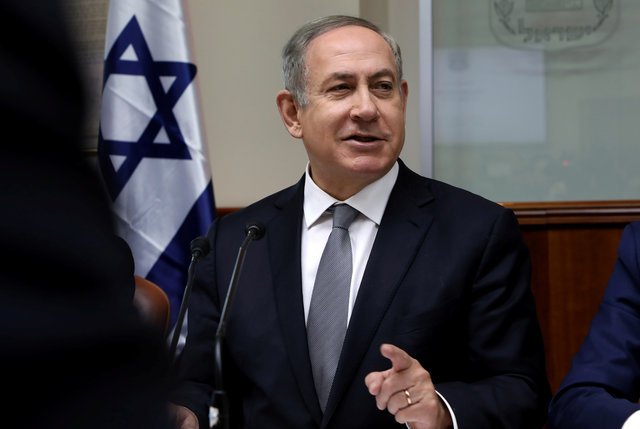 Israeli Prime Minister Benjamin Netanyahu sidestepped a question on whether he still supports the creation of a Palestinian state as he left for the United States on Monday on his first visit since President Donald Trump took office.

Netanyahu has never publicly abandoned his conditional backing for Palestinian statehood, which he first stated in 2009, but Palestinians say that commitment has been rendered worthless by Israeli settlement building on occupied land.

Hours before Netanyahu‘s departure for Washington, Public Security Minister Gilad Erdan told Army Radio that “all members of the security cabinet, and foremost the prime minister, oppose a Palestinian state”. The forum convened on Sunday ahead of Wednesday’s White House meeting between Netanyahu and Trump.

On the Tel Aviv airport tarmac, Netanyahu was asked if he still stood behind the so-called two-state solution. “Come with me, you’ll hear very clear answers,” he told reporters accompanying him on the flight.

If confirmed, a departure from a two-state policy would present Israel with diplomatic, political and demographic challenges as it contends with the complex question of how to deal with a Palestinian population now under limited self-rule.

Far-right partners in Netanyahu‘s coalition have called for the annexation of parts of the West Bank, a demand he has resisted.

He has already conditioned Palestinian statehood on demilitarisation, long-term presence of Israeli troops in the West Bank and Palestinian recognition of Israel as the “nation-state” of the Jewish people.

A one-state solution to the conflict would compromise Israel’s Jewish character through the absorption of several million Palestinians.

Erdan belongs to the right-wing Likud party, many of whose legislators often espouse a harder line than Netanyahu himself.

Asked about Erdan’s comments, Wasel Abu Youssef, an official of the Palestine Liberation Organization, said it is also “what the government of the extreme right in Israel does on the ground (that) prevents any chance of the establishment of a Palestinian state”.

Palestinians seek a state in the occupied West Bank and the Gaza Strip with East Jerusalem as its capital. Israel captured those areas in a 1967 war; it pulled its troops and settlers out of Gaza in 2005.

Since Trump took office last month, Netanyahu has approved construction of 6,000 settler homes in the West Bank and East Jerusalem, drawing international condemnation which the White House did not join.

In recent days, however, the Trump administration has taken a more nuanced position, saying building new settlements or expanding existing ones may not be helpful in achieving peace.

But in his airport remarks, Netanyahu said that he and Trump “see eye-to-eye on the dangers emanating from the region but also on the opportunities, and we’ll talk about both as well as upgrading the relations between Israel and the United States in many, many fields.”

Also on the agenda will be the situation in Syria, and a 2015 nuclear deal with Iran thatNetanyahu and Trump have strongly criticised. Before flying home on Thursday, Netanyahuplans to meet Vice President Mike Pence, Secretary of State Rex Tillerson and Republican and Democratic Congressional leaders.