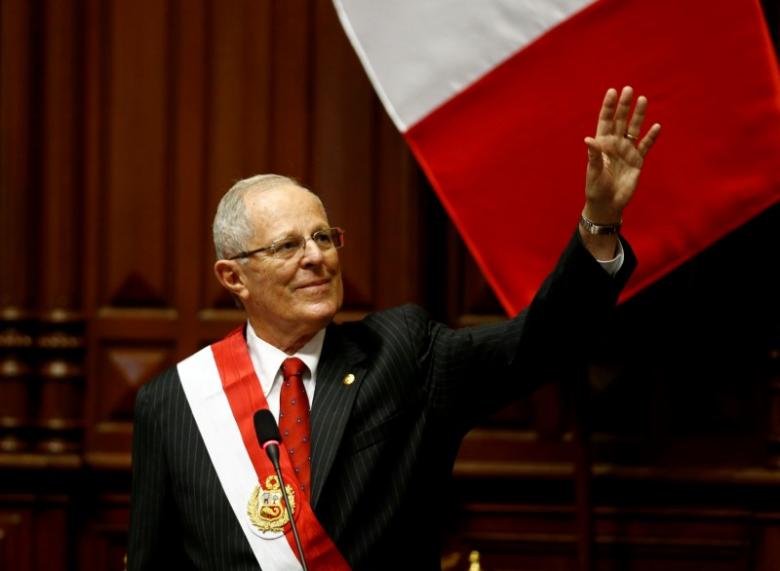 Peru's President Pedro Pablo Kuczynski waves to the audience after receiving the presidential sash during his inauguration ceremony in Lima, Peru, July 28, 2016

Kuczynski’s government believes that Toledo, wanted in connection with a far-reaching graft probe, is in the United States but that efforts to capture him there have stalled on legal hurdles.

Kuczynski did not describe Trump’s response to his request and the White House did not mention Toledo in a read-out of the conversation.

Kuczynski is expected to give a televised address later on Sunday.

Late on Thursday a Peruvian judge issued an international arrest warrant for Toledo, who has repeatedly denied allegations by prosecutors that he took $20m in bribes from Brazilian construction company Odebrecht.

The dispute is threatening to strain tensions between the United States and Peru, a traditional US ally in South America and one of the world’s biggest producers of cocaine.

Trump said that the two leaders spoke to “reinforce the strong bilateral ties that exist between the United States and Peru,” the White House said.

Kuczynski said that both leaders exchanged their viewpoints on the US-Peru relationship and the “ample possibilities for deepening them on the back of agreement on topics of the defense of democratic principles and the fight against corruption.”