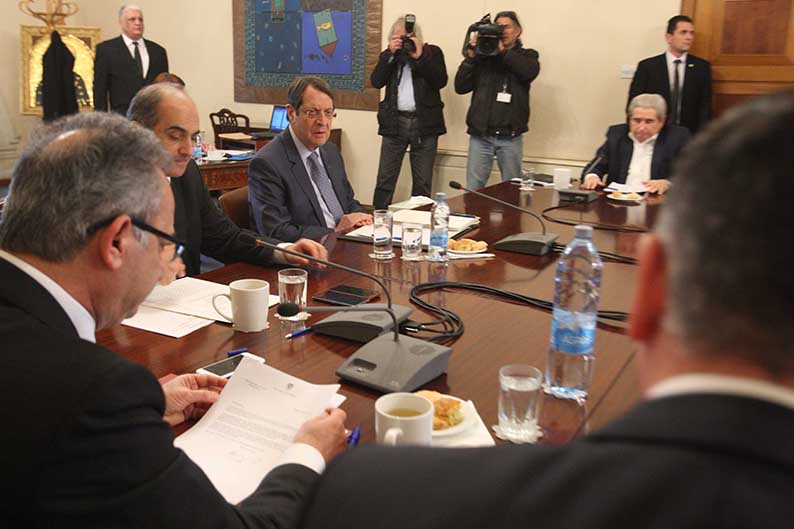 Nicos Anastasiades on Monday strongly condemned Turkish Cypriot reaction to the move by parliament last week to approve a proposal by far-right Elam to effectively introduce an ‘Enosis Day’ in schools, and in a scathing written statement, the president pointed the finger at “the provocative celebrations” held in the north to commemorate the 1974 invasion.

Anastasiades was responding to the escalating reaction from the Turkish Cypriot side to parliament’s move to commemorate the 1950 pro-Enosis plebiscite in which 95 per cent of Greek Cypriots voted for union with Greece.

Turkish Cypriot leader Mustafa Akinci who, speaking after he met the UN Secretary General’s special representative in Cyprus, Elizabeth Spehar, earlier on Monday, bemoaned the fact that Greek Cypriot political parties had been  swayed by what he described as “a racist party” like Elam.

Just 19 votes from the smaller parties – excluding ruling Disy, which abstained, and main opposition Akel, which opposed – were enough for the proposal to be approved last Friday.

Amidst reports that Tuesday’s meeting of the two sides’ negotiators had been cancelled as part of the reaction, Akinci also criticised the fact that Anastasiades had waited days to respond. He said he was waiting to see what Anastasiades would do before their scheduled meeting on Thursday.

The response was not long in coming. In a written statement issued shortly after Monday’s National Council meeting, Anastasiades criticised the Turkish Cypriot side’s reaction to a decision “for a mere reference to an historical fact” that did not constitute a change of policy.

“And I will not allow anyone to challenge the sincere intentions of the Greek Cypriot side in the effort to find an acceptable solution for both communities, as is clearly set out at the negotiating table,” he said.

“Within the same framework, what genuine intention to solve the Cyprus problem do the ceremonies and celebrations for the illegal declaration of the pseudostate constitute, which are in substance the seeking of secession or the partition of Cyprus?” he added.

Anastasiades said he had in practice repeatedly demonstrated at the negotiating table the Greek Cypriot community’s genuine and sincere will to find a solution within the framework of what has been on various occasions agreed at the highest levels, “but also a solution that does not create winners and leaves losers with a view to responding to the concerns and expectations of Greek Cypriots and Turkish Cypriots.”

“I strongly feel that if we all want to achieve the same goal, we must work with determination, abandoning any pretexts and particularly any unacceptable claims and conditions that do not serve the interests of Turkish Cypriots and Greek Cypriots,” he concluded.

In a rare unanimous statement, the National Council said it “condemns the deliberate distortion within the Turkish Cypriot community” over the vote.

Enosis with Greece was never raised, nor was it going to be raised, “just as there is no question of accepting any form of solution that leads to partition”, the joint statement said. Akel on Monday, though it opposed Friday’s vote, said it agreed with the National Council’s condemnation of the reaction from across the divide.

Meanwhile, the Turkish Cypriot New Cyprus Party (YKP) on Monday pulled out of a joint event with the Cyprus Greens-Citizens’ Cooperation over the House vote.

Before the House move, the Greens – who supported the Elam proposal – had organised a discussion on the security issue and guarantees after a solution to the Cyprus problem for Monday night at Journalist’s House in Nicosia.

It includes a presentation of preliminary research findings “Dialogue Initiative on Security” done by the Centre for Sustainable Peace and Democratic Development. The research was carried out by both Greek Cypriots and Turkish Cypriots. The research is to be presented by Dr Alexandros Lordos, Dr Ilke Dagli and D George Kentas. After the presentation, a discussion with Greek Cypriot and Turkish Cypriot political figures, journalists, researchers and others was to follow.

However, the YKP said in a statement Monday morning that they would not now be participating “for two reasons”.

“Firstly, after the decision of the parliament about 1950s collection signatures for Enosis (following Elam’s), we believe that, this will create new fears in both communities following the reaction of both sides’ political elite on basis of nationalism… We therefore believe that with the new circumstances the research will not be valid any more,” it said

“Secondly, YKP is an anti-fascist party, which means that on basis of principle we do not accept any kind of tolerance or cooperation with any kind of fascist and neo-Nazi party, like Elam. Under these circumstances, we believe that, we don’t have any common ground to organise or have any kind of cooperation with the Cyprus Green Party-Citizens’ Cooperation.”