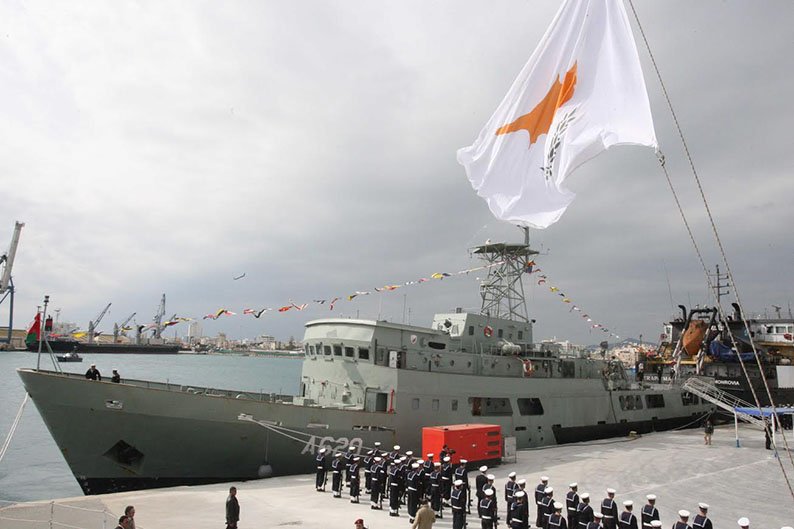 A modified yacht formerly owned by the Sultan of Oman, which was gifted to the Republic of Cyprus by the sultanate in 2014 was christened at Larnaca port on Tuesday and renamed ‘Alasia’ during a ceremony jointly conducted by Defence Minister Christoforos Fokaides and Omani ambassador Sheikh Ahmed Al-Shanfari.
The boat sailed off from Oman earlier this month and arrived in Cyprus through the Suez canal.

Although fitted with guns and intended to be used for patrolling Cyprus’ territorial waters, the boat’s hull was deemed too big to fit in the ‘Evangelos Florakis’ naval base at Mari, which is why it ended up docking at Larnaca port.

The ship was brought to Cyprus by National Guard naval officers, escorted by Omani Royal Navy officers, who used the voyage as an opportunity to train the Cypriots on the technicalities of its operation.

The vessel was donated to Cyprus by the Sultan in appreciation of the warm welcome he had received in his November 2013 visit to the island.

On Tuesday, Fokaides expressed the government’s thanks to Oman for the donation of the vessel, noting the “excellent cooperation” between the two countries.

He said that as Cyprus was situated at the crossroads of three continents, naval development has been and would always be essential and necessary.

He also stressed the willingness of the government to continue to work systematically, so that through planning for the development of the navy and in cooperation with neighbouring and friendly countries, Cyprus could further contribute to the creation of maritime and energy security conditions, and humanitarian and rescue operations in the region.

Sheikh Ahmed Al-Shanfari, in his speech thanked Fokaides for the warm hospitality and said the donation of the vessel was a gesture of friendship between the two countries.

Referring to the ship’s voyage from Oman to Cyprus with crew from both countries, he said this had symbolised the cooperation between the two peoples.

Strike called off at port after transport minister mediates (Update 2)