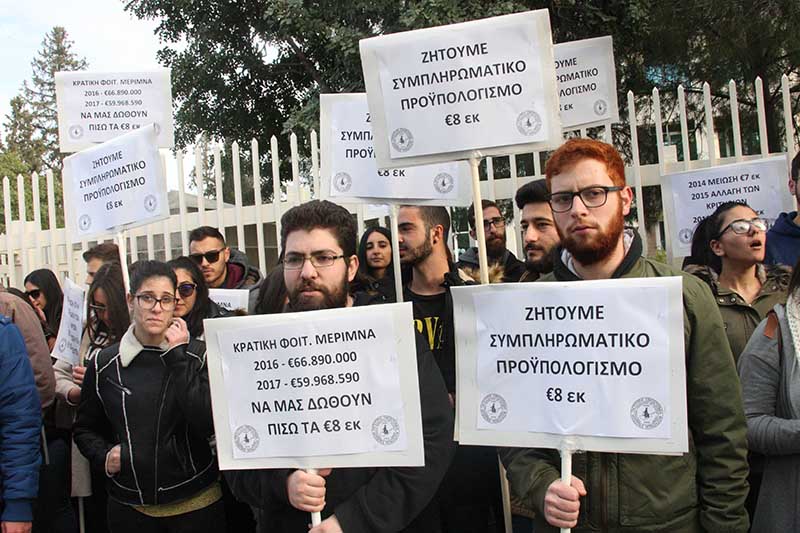 Education Minister Costas Kadis said on Tuesday that a protest on Tuesday by the tertiary students body POFEN over the slashing of annual student grants by €7m was not justified as beneficiaries will not receive a cent less than they are entitled to.

Higher education students marched on Tuesday afternoon to the Presidential Palace where they delivered a memo saying the education ministry’s 2017 budget was “a new attack of the government on student entitlements” and demanded that an additional €8m budget be approved for student welfare.

“Student welfare issues are regulated by legislation which has been recently voted by parliament with the support of the majority of the political parties,” Kadis said. Based on this legislation, he said, beneficiaries will not receive less money.

On top of that, he said, his ministry introduced last year, for the first time, a number of additional support measures to increase allowances for local and Greek students, the financial support of needy students at Christmas, and covering the tuition fees of students who were unable to pay and risked not getting their diplomas.

Compared to last year’s budget, he said, there is a 33 per cent increase this year as regards student allowances.

“All these provisions were in addition to what the law provides. We believe that this should have been appreciated by Pofen, by our students, and this is why we find today’s protests unjustifiable,” Kadis said. “At the end of the day there is nothing our students are entitled to, based on the existing legislation, which they will not get”.

Students however, reject the minister’s arguments on the additional support measures, and maintain that reduction of the annual budget means “further reduction of beneficiaries”.

Pofen said that last year there was a €7m surplus with which the ministry “was stubbornly refusing to support more students”.

Kadis said that last year’s surplus was returned to the state fund and was used to benefit education, including tertiary education.

Pofen also demanded the review of the income and asset criteria for student grants and the student package – aid given to needy students in the form of rent subsidies, food stamps, or aid to buy textbooks and laptops – and for those who are eligible for the student grant to be entitled to free healthcare and free bus transport.

The student grant was among the first benefits to be slashed due to austerity measures four years ago. In 2015, legislation was passed which caps eligibility for a student grant based on family income.

While in the past the state would give €2,550 to each student, with an additional €850 if the student came from a large family, restrictions were put in place so students coming from wealthy families wouldn’t receive the grant.