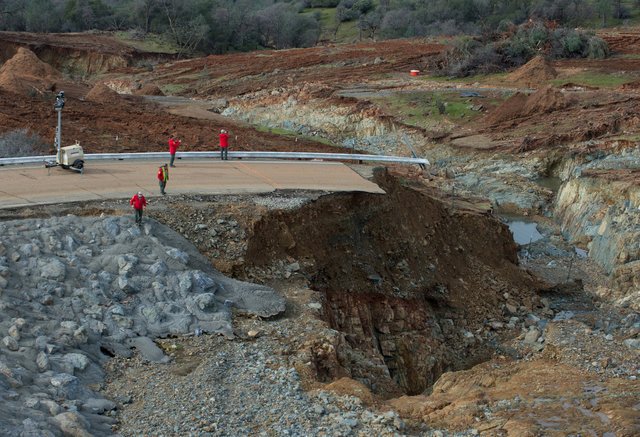 Tens of thousands of Northern California residents remained in shelters on Tuesday as engineers worked to shore up a crumbling overflow channel and drain the rain-swollen reservoir at the United States’ tallest dam before new storms sweep the region.

Evacuation orders for some 188,000 residents remained in effect as the risk to those living in the Feather River valley below the Lake Oroville Dam, 65 miles (105 km) north of Sacramento, was being reviewed, officials said.

“We’re doing everything we can to get this dam in shape that they can return and they can live safely without fear. It’s very difficult,” California Governor Jerry Brown told reporters during a news conference on Monday evening.

Brown on Monday sent a letter to President Donald Trump requesting he issue an emergency declaration, which would open up federal assistance for the affected communities.

Residents below the dam were ordered from their homes on Sunday when an emergency spillway that acts as an automatic overflow channel appeared on the brink of collapse from severe erosion during what is on track to be Northern California‘s wettest winter on record after years of drought.

Authorities said they had averted the immediate danger of a catastrophic failure that could unleash a wall of water three stories tall on towns below.

On Monday afternoon, crews dropped large bags filled with rocks into a gap at the top of the emergency spillway to rebuild the eroded hillside.

The main spillway, a separate channel, is also damaged because part of its concrete lining fell apart last week. Both spillways are to the side of the dam itself, which has not been compromised, engineers said.

The situation grew less dire later on Sunday as water levels dropped, leaving the weakened unpaved emergency spillway largely intact. By Monday, the level of the lake fell enough so that water was no longer pouring over the hill.

Erosion caused by the hole in the side of the main concrete spillway appeared to have abated by Monday, and it was back to more or less normal operations, officials said.

On Monday, water could be seen gushing from the main spillway as dam operators for the California Department of Water Resources continued controlled releases through the chute into channels that route the water away from populated areas.

The aim is to lower the reservoir’s overall water level by 50 feet – and prevent further spillover down the emergency hillside channel – before more rain arrives in the coming days and snow-melt runoff begins in the spring, acting state water resources director Bill Croyle told reporters. He said he hoped to achieve that goal within two weeks.

Another storm was forecast to arrive as early as Wednesday or Thursday, though officials said they expected much of that precipitation to fall as snow rather than rain.

UN, Trump denounce North Korea, but no sign of any action