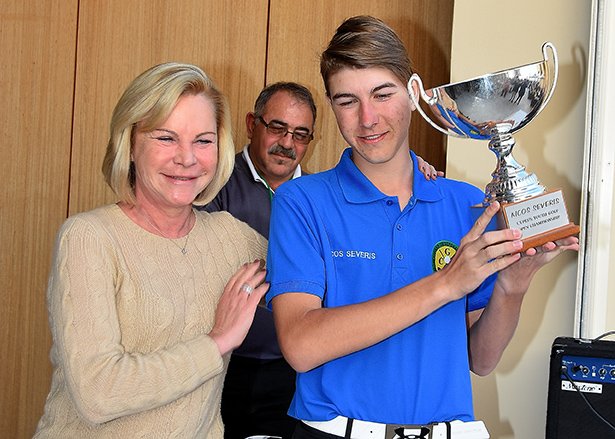 The annual Nicos Severis Youth Golf Open was held at the Elea Estate Golf Club at the weekend with the participation of 124 youngsters – the youngest was five years old – from 16 countries from Europe and the Mediterranean region.

This was the fifth successive year the two-day event, which ended with Sunday’s awards ceremony, is organised by the Cyprus Golf Federation and sponsored by Marie Severis, wife of the late Nicos Severis, who was the first President of the Cyprus Golf Federation (CGF), from 2000 until his death in 2008. Severis was an avid golfer who had tried to encourage the young to play the game.

Weekend weather conditions were ideal and participants, mainly from northern European countries, were delighted with the spring conditions in Cyprus in mid-February.

The president of the CGF, Dimitris Papapetrou, expressed his satisfaction for the excellent organisation, the number of participants and their high standard. He thanked Mrs Severis and her family for the long-standing support of golf in Cyprus and in particular of junior golf.

The intention of both the federation and the sponsor was to enhance and upgrade the event to a three-day competition soon, which would make it eligible for inclusion in the list of participating events for World Amateur Golf Ranking (WAGR) points, Papapetrou said.

A strong field of 51 foreign and Cypriot youngsters took part in the 36-hole championship. On Day 1 Austria’s Paul Schebesta and Italy’s Lorenzo Tatti shared the lead, both on 75, with Germany’s Henry Winter-Bourke in third place on 76 and local boy Savvas Michaelides in fourth place on 77.

On the second day, Bulgaria’s Ryan Staykov and Russia’s Daniel Barrios Milioukov both had blistering rounds of 73 each, but Schebesta’s steady game saw him shoot 74 for the day and claim the 2017 Championship with a total score of 149.

Sunday, Day 2 of the event, saw the Championship players being joined on the course by another 73 juniors – ages ranging from 5 to 14 years old – competing in different age and ability groups. Worthy of note was the hole-in one by 8-year-old Oliver Halifax during Friday’s practice.

Eating our way to collapse