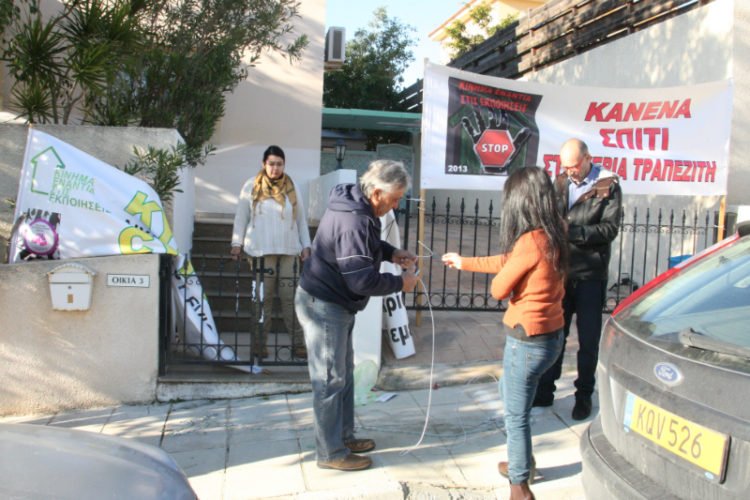 Following protests, a bank on Wednesday suspended an eviction order of a woman in Limassol, who reportedly owes around €80,000.

Representatives of the movement against foreclosures, single parent families, and politicians, gathered outside the house in Ayios Tychonas on Wednesday morning, to protest the bank’s intention to take the house.

Bank of Cyprus was planning to put the property, reportedly worth over €300,000, up for sale.

Lawyer Christos Poutziouris questioned why the bank didn’t sell land belonging to the deceased husband to collect the money and complained that the bank had charged excessive interest rates in recent months.

The house belongs to Elena Liliana Agathangelou who has a 22-year-old daughter. Her husband died in 2008.

“We have repeatedly asked to address the problem of the eviction of single-parent homes, without any response to date from the state. Note that most single parent families consist of women and children and most mortgage debts relate to loans by spouses for which the legislation does not provide any solution,” the Pancyprian Association of Single Parent Families and Friends commented.

The movement against foreclosures added that the move is totally unacceptable particularly as the widow and her family has a pension of €500 as their only source of survival.

The Cyprus Mail has learned however, that the woman only uses the two-storey villa with a swimming pool, for a few months every year and that she spends the rest of the time in Romania, her home country.

Bank sources said the bank was not even aware that someone lived in the house. The bailiff had to post the eviction order on the door because there was no one to receive it.

The house was acquired by the husband with a loan from BoC, which has not been services since 2009. With interest, the loan has reached €94,000.

The bank believes the affair was the result of differences between the woman and the deceased man’s daughter from a pervious marriage.

That daughter and two administrators of the man’s estate were in constant contact with the bank, discussing various ways to repay the debt. Liliana however, did not accept a debt for asset swap, nor a sale of the property.

Attending the protest, Akel parliamentary spokesman Giorgos Loukaides said a battle had been won, but not the war.

“The struggle against foreclosures, the main residence especially, continues and must continue so that we can offer a real safety net to all those families that found themselves in dire financial conditions because of the bank crime,” he said.