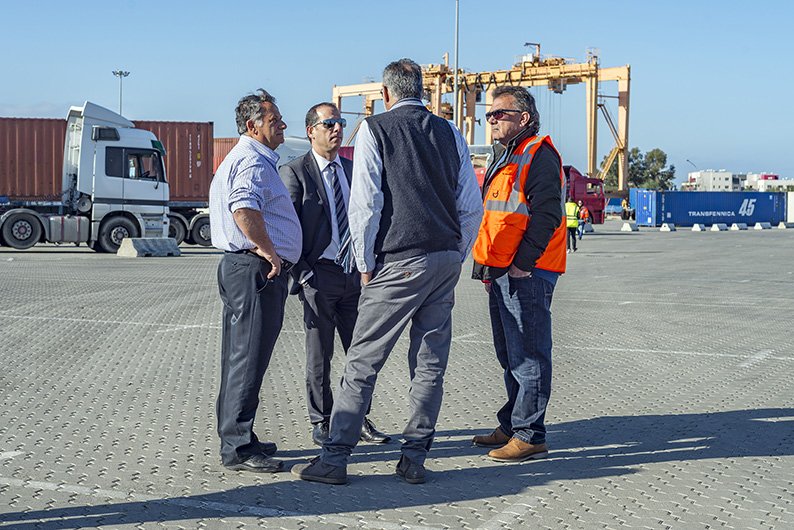 Some of the tension mounting at the Limassol port since container terminal operator Eurogate took over earlier this month was relieved when the company agreed to compensate hauliers for time wasted in delays during loading and unloading at the port, it was announced on Wednesday afternoon, even as the truckers’ union may reject the deal in a vote on Thursday.

The deal was announced by the truckers’ union rep Yiorgos Charalambous following a meeting between the port operator and the union, in the presence of Transport minister Marios Demetriades.

According to Charalambous, the proposal for compensation to be paid by the company for every hour over two after each trucker waits inside the port, was accepted by Eurogate, although the agreed rate of €50 per hour may not be acceptable to some of the truckers.

If the union does not accept the compromise deal in a vote on Thursday, Charalambous announced he would resign his post.

Per the agreement between the union and Eurogate, the measure will be in force for two months, by which time the company undertook to have taken all necessary measures to address the problems causing massive delays.

Earlier on Wednesday, Eurogate had appealed to truck drivers to lift a blockade, an action they carried out in protest over long delays, something that the truckers’ union denies.

“Eurogate believes that cutting off the entrance to the terminal only makes the situation worse and appeals to all stakeholders to continue the substantive dialogue to avoid unpleasant developments,” the company said in an emailed statement on Wednesday.

A Eurogate official said Wednesday’s delay in loading and unloading containers to and from lorries, which prompted them to block access to the terminal, was caused by a software failure.

The company had, as agreed on Tuesday, employed more staff and equipment to speed up procedures, the official said.

“Until yesterday we had 11 (container lifts) and the number has been increased to 17 and output was on the rise today,” Giorgos Pouros, Eurogate’s manager at the Limassol port said during a telephone interview on Wednesday.

“We ordered another five from Germany and they will arrive in a month,” Pouros, who was the Limassol port master when it was operated by the Cyprus Ports Authority (CPA) said. He added that the company will also repair a number of broken cranes, increasing their number to 25.

After the electronic system, which gives loading and unloading instructions malfunctioned for half an hour, angry lorry drivers awaiting to be serviced thought Eurogate broke its promises, he said.

Charalambous denied reports that truck drivers cut off the terminal’s entrance adding that they instead decided to refrain from work. Earlier on Wednesday, access to the terminal was blocked when drivers left their trucks parked on the lane and walked out of the port when they discovered that they were not being serviced at the rate Eurogate had promised. One of the drivers outside the port who spoke on condition of anonymity, said that he disagreed with his colleagues’ decision to block access to the port.

The company says a combination of factors was to blame for the chaos caused at the port after Eurogate assumed responsibility for the container business in late January, including equipment and software failures as well as the lack of space for trucks to load and unload.

A driver waiting outside the port said that until three weeks ago, they could drive their lorries to the container storage area where a crane would load or unload their cargo. Now they had to wait at a different spot.

The container lifts now have to cover a distance of some 500 meters, find the container and then load it onto a truck, causing delay, he said.

Pouros said the lack of space prevented Eurogate from applying the previous system, adding that if they were given more space it would speed things up considerably.

In a statement issued on Wednesday, Eurogate said it was taking additional measures to alleviate the problem and normalise operations at the hub.

The company’s statement, which came after the Cyprus Chamber of Commerce and Industry warned that companies were running out of stock and raw materials as a result of the chaotic situation at Cyprus’s main port, said that the company would also fly in more staff from its headquarters in Germany.

“By acknowledging the problems which have emerged, Eurogate asks stakeholders for time (and is) assuring that it is making every possible effort to resolve them immediately,” Eurogate said. “The company is in continuous dialogue with stakeholders and works intensively with a positive spirit in an attempt to completely normalise the terminal’s operation”.

Earlier, Transport Minister Marios Demetriades said that the government would consider its options if Eurogate failed to improve the situation.

Drivers, whose trucks outside the port have formed long queues, complained about the lack of toilets in the area in which they have to spend up to 12 hours to pick up or deliver cargo.

The drivers often opted to spend the night there instead of returning home fearing it would further delay their servicing time and reduce their earnings. Some of them reported that frustrated colleagues engaged in altercations with Eurogate staff members inside the port. A police officer outside the port said the situation was calm.

“I left home on Monday at 5am and immediately came to the port to pick up a container, spent the whole day here, which by the way was my wife’s birthday, and returned home two hours before midnight,” Yiannis, another driver said. “Yesterday, it was Valentine’s Day and I had to so the same. When I got back home at 10 with no present for her, she was of course angry at me”.

Yiannis’ wife may not be the only person in Cyprus whose Valentine’s was spoiled by the delays. Kyriacos, another trucker waiting outside, said a flower importer who was expecting a shipment ahead of the Valentine’s received it only late yesterday.

The transport minister said in an interview to state-radio CyBC on Wednesday that he had repeatedly raised the issue with Eurogate and its main shareholder, Thomas Eckelmann.

“I expect the company to assume its responsibility or else we will have to see what we will do,” he said, without specifying what the government’s options were. “It’s impossible for a company managing 16 million containers a year not to find a solution for a small terminal of 200,000 containers”.

Eurogate agreed on Tuesday to handle containers with cargo and empty ones in separate areas, to deliver refrigerated containers directly at a specific area and employ more container lifts to load and unload trucks. A third shift was also introduced.

Charalambous, the truckers’ union official, said that while Eurogate had to service roughly 60 trucks every hour, in four hours on Wednesday morning he only saw 60 trucks leaving the port.

Learn the healing art of mandalas