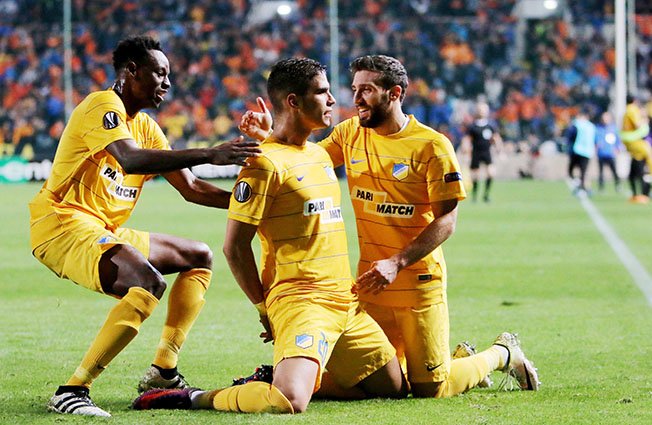 Apoel’s Europa League adventure resumes on Thursday with a daunting visit to Athletic Bilbao for the first leg of their Round of 32 tie.

Thomas Christiansen’s side defied the odds in the group stages, finishing first ahead of Olympiacos, Young Boys and Astana respectively, thus giving them the ‘advantage’ of playing the first game away from home.

Though it is up for debate as to whether it will really work to the Cypriots’ advantage, seeing as Athletic’s San Mames is one of the toughest grounds in the competition, both for the quality of the hosts combined with the raucous atmosphere.

The big team news for Apoel is that striker Pieros Sotiriou has made the journey to the Basque Country after initial fears he would miss out after a knock which caused him to be unavailable for the recent league game against Karmiotissa.

The Cypriot played a crucial part in the group stages, scoring the only goals in the games against Olympiacos away and at home to Young Boys.
Full-back Milanov and winter signing David Barral have trained this week and could play some part in the manager’s plans.

Barral and Sotiriou may well fancy their chances at San Mames, as the Basques are enduring somewhat of a goalkeeping crisis. Promising young keeper Kepa had been the number one choice between the sticks for Athletic this season, until he suffered a serious injury before Christmas which is expected to keep him out for a further few months.

Experienced stopper Iraizoz would be the logical replacement but the veteran missed Monday’s training session due to gastroenteritis. The 35-year-old did make Tuesday’s workout but doubts still loom.

Sabin Merino will also miss out but the hosts will have their main forward Aritz Aduriz fit, and he will be eager to add to his six Europa League goals scored so far this campaign, the most of any player in this year’s competition.

For Apoel press officer Nektarios Petevinos, the main aim is for his side to remain in with a chance of progressing when the two teams meet in Nicosia one week later.

“Apoel have shown that we are not afraid of any team in Europe,” he said before adding: “We hope that this tie will continue in Cyprus. We want a result where qualification (to the last 16) will be determined over two games.”

Athletic president Jose Urrutia spoke about the upcoming tie and was keen to stress the importance of not underestimating their opponents.
“They will be tough games. I am not saying we are not favourites but football is now far more even. Athletic’s situation is more complicated. We want to win every game, whether it be at home or away.

“We have a competitive team which we want to improve. It is important that we are in this competition against the top teams.”
Apoel tend to struggle away from home in European competition but did manage to earn their first ever victory on the road beyond the qualifying rounds with that win in Piraeus.

While Athletic’s away form – two defeats and one draw – ultimately cost them top spot in the group, their home form was flawless with three wins from three games. Currently eighth in the Primera Division, Ernesto Valverde’s men have lost just one game at home this season, against Barcelona back in August.

Some 1,500 Apoel supporters are estimated to be in attendance at San Mames to help push their side to a positive result. The game kicks off at 10.05pm Cyprus time.

Snow and ice on the roads

€2,000 of cigarettes stolen from Larnaca kiosk