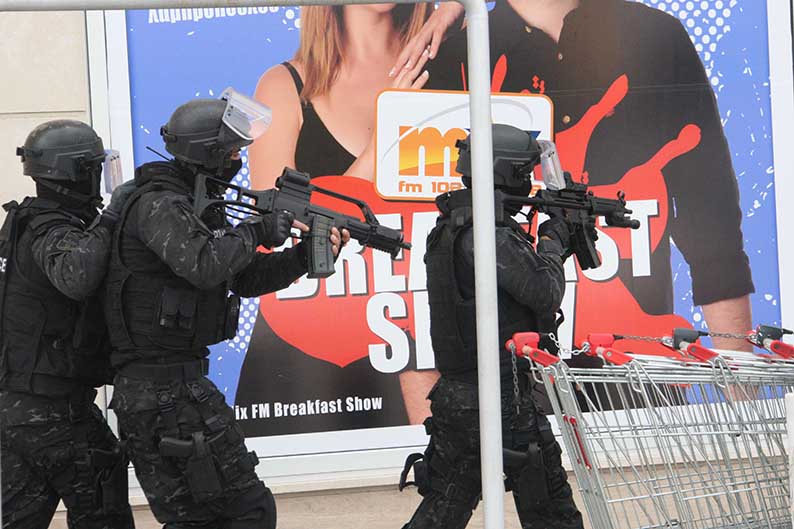 Members of the special antiterrorist unit of the Cyprus police (Photo: Christos Theodorides)

THERE is no evidence to suggest that Cyprus might face a serious terrorist risk at present, police chief Zacharias Chrysostomou said on Thursday, following a police drill involving a hypothetical terrorist hit at The Mall of Cyprus in Nicosia.

The drill, using the code name ‘Dimos 2017’, aimed at assessing the readiness and response levels, as well as the coordination, of relevant authorities, in case of such an incident, which shares the characteristics of an asymmetric threat, a “blind strike unfortunately targeting unsuspecting citizens”.

A coordinating and operational role in the drill was assumed by riot-squad Mmad, while the Nicosia police directorate was also involved as the affected district, as were several other police departments and services.

Staff was recalled from across the island, while three crisis-management centres were set up – at Mmad, at the scene, and at the Nicosia police directorate.

General coordination was under the leadership of the police.

Other government agencies involved were the Health ministry and the fire service.

The drill’s scenario involved an attack with explosions and gunshots by three terrorists at the mall, leaving six individuals dead and ten injured.

The terrorists then locked themselves up in one of the mall’s shops, holding ten people hostage.

At the scene to deal with the incident, several departments from the police, ambulances and fire engines arrived. Among them was a police team of negotiators, who undertook contact with the terrorists.

Per the scenario, negotiations failed to produce the desired result, and the drastic intervention of Mmad’s special antiterrorism unit was decided.

Following a raid on the store, the SAU members exchanged fire with the terrorists but managed to rescue all the hostages.

Two of the terrorists were arrested, while the third was killed by police fire during the exchange.

Speaking to reporters, chief Chrysostomou said that the Cyprus police, like any similar organisation in the European Union and beyond, is called to face a host of challenges in an increasingly complex world.

“Against this backdrop, the Cyprus police conducts practical exercises and training, most of which are not made public, to ensure maximum alertness and readiness,” police chief Chrysostomou said.

“The Dimos 2017 drill is part of a broader effort to remain in full readiness and achieve maximum efficiency with regard to a possible terrorist hit on Cypriot soil. For the moment, at least, there is no evidence to suggest our country might be under serious threat of terrorism.”

However, he added, taking all factors into account, including the eastern Mediterranean region’s geopolitics, and terrorist attacks in the heart of Europe over the last three years, “we must remain alert and take every precaution in connection with the threat of terrorism”.

Asked to comment on the expansion of the cooperation between police and the National Guard with regard to the guarding of airports and ports for another two years, Chrysostomou said the measure is evaluated regularly, suggestions are made and decisions are taken at a cabinet level.

Akel ‘saddened and alarmed’, calls on leaders to return to talks