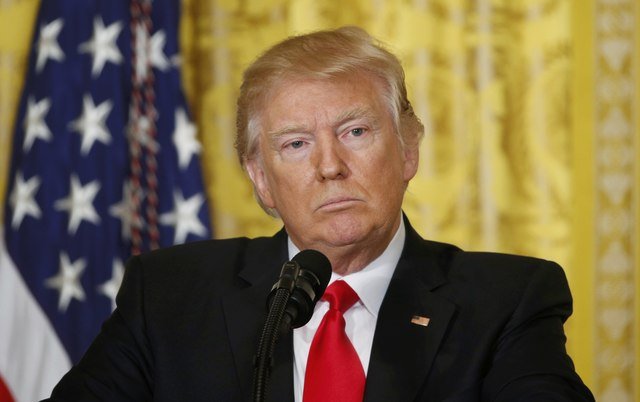 President Donald Trump dismissed a growing controversy about ties between his aides and Russia on Thursday as a “ruse” and “scam” perpetrated by a hostile news media, and denied that any of his associates had contacts with Moscow before last year’s election.

“The leaks are absolutely real. The news is fake,” Trump told a news conference, referring to media reports that his presidential campaign team had contacts with Russian intelligence officials.

Trump, who frequently assailed the news media, also said he had not directed his former national security adviser, Michael Flynn, to talk to Russia’s ambassador about US sanctions before taking office.

Trump said he had asked the Justice Department to look into the leaks of “classified information that was given illegally” to journalists regarding the relationship between his aides and Russia.

He also said he did not think that Putin was taking actions that would test him early in his term in office.

Trump, who took office on Jan 20 and has voiced support for improved ties with Russia, added that he personally had no business deals in that country.

The New York Times reported on Tuesday that phone call records and intercepted calls showed members of Trump’s presidential campaign and other Trump associates had repeated contacts with senior Russian intelligence officials in the year before the Nov 8 election in which Trump defeated Democrat Hillary Clinton.

Pressed by reporters about whether he was aware if any member of his presidential campaign team had contacts with Russia before the election, the Republican president said, “Nobody that I know of.”

Wary Democratic lawmakers challenged Republicans, who control Congress, on Thursday to conduct a credible investigation into contacts between Trump’s associates and Russia. The process could take months and might never be made public.

US intelligence agencies last year concluded that Russia hacked and leaked Democratic emails during the election campaign as part of an effort to tilt the vote in Trump’s favour.

Trump has spoken admiringly of Russian President Vladimir Putin, who had a tense relationship with former President Barack Obama over Moscow’s 2014 annexation of Crimea from Ukraine, Russian military actions in Syria and other matters. Even fellow Republicans have expressed unease about Trump’s comments about Putin.

Flynn, a close adviser to Trump during his campaign, was seen by Moscow as a leading advocate of warmer ties with Russia. Trump fired Flynn on Monday after the retired lieutenant general misled Vice President Mike Pence about conversations he had with the Russian ambassador to the United States, before Trump took office, regarding US sanctions on Moscow.

Obama imposed the new sanctions on Russia on Dec 29 after the US intelligence community’s conclusion about Moscow interference in the election campaign. A US official familiar with the transcripts of the calls with the ambassador said Flynn indicated that if Russia did not retaliate, that could smooth the way toward a broader discussion of improving US-Russian relations once Trump took power.

This was potentially illegal under a law barring unauthorised private citizens from interfering in disputes the United States has with other countries.

“What he did wasn’t wrong,” Trump said.

“Mike was doing his job. He was calling countries and his counterparts. So, it certainly would have been OK with me if he did it. … I didn’t direct him, but I would have directed him because that’s his job,” Trump said.

“No, I didn’t direct him, but I would have directed him if he didn’t do it. OK?” Trump said, who said the problem was Flynn’s having misled Pence.

Trump again expressed interest in improving ties with Moscow but he said it remains to be seen whether that can occur.

A wealthy new York real estate developer with global business interests, Trump also portrayed himself as having no ties to Russia.

Critics of the president have called on him since the days of the election campaign to release his tax returns, saying this would shed more light on his business dealings. Trump has said that he will not do so while his tax affairs are under audit by the Internal Revenue Service.

“I have nothing to do with Russia, haven’t made a phone call to Russia in years, don’t speak to people from Russia. Not that I wouldn’t. I just have nobody to speak to,” Trump added.

Trump’s defense secretary, Jim Mattis, told reporters after talks at Nato headquarters in Brussels on Thursday that he did not see possible military collaboration with Russia now, in a blow to Moscow’s hopes to mend ties with Washington after Trump’s election.