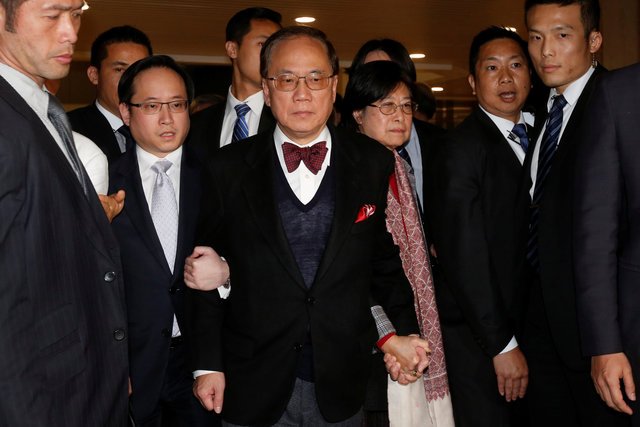 Former Hong Kong leader Donald Tsang, the highest-ranking ex-official to be charged in the city’s history, was on Friday found guilty of one charge of misconduct in public office.

The nine-person jury, however, found Tsang not guilty of a second misconduct charge, and failed to reach a majority decision on a bribery charge.

Tsang, 72, had pleaded not guilty to one count of accepting an advantage and two counts of misconduct in public office between 2010 and 2012.

According to Hong Kong law, Tsang faces a possible seven-year sentence. Sentencing will take place later but the court did not announce a date.

The verdict came after six weeks of testimony from witnesses including Carrie Lam, Hong Kong’s former chief secretary who is in the running for the city’s leadership election next month.

Tsang, who was dressed in a suit and his trademark bow tie, emerged from the court with his wife and family, looking sombre after the verdict was handed down.

Tsang was accused of accepting refurbishment and decoration work on the three-storey penthouse in the southern Chinese city of Shenzhen that he had rented from the Shenzhen East Pacific Group, owned by property tycoon Bill Wong Cho-bau. The jury failed to reach a majority decision on this charge after deliberating for nearly two days.

The first misconduct charge was for Tsang’s failure to disclose his rental negotiations with Wong while his cabinet discussed and approved a digital broadcasting licence for a now defunct radio company, Wave Media, in which Wong was a major shareholder, according to Hong Kong’s anti-graft agency, the Independent Commission Against Corruption.

He was found guilty on this count.

The second misconduct charge was in connection with Tsang’s nomination for a government award of an architect who had carried out design work on the Shenzhen penthouse.

He was found not guilty of that charge.

The once-popular, church-going son of a policeman found himself in hot water at the twilight of his lengthy career.

He was knighted by Queen Elizabeth for his distinguished public service under the British colonial administration before Hong Kong’s return to Chinese rule in 1997.

His close links with the former British colonial government created unease in Beijing and among pro-Beijing elements in Hong Kong.

US’ Tillerson calms allies on Syria ahead of Geneva talks

Tourist arrivals up 29% in January on Russian boost, Cystat says