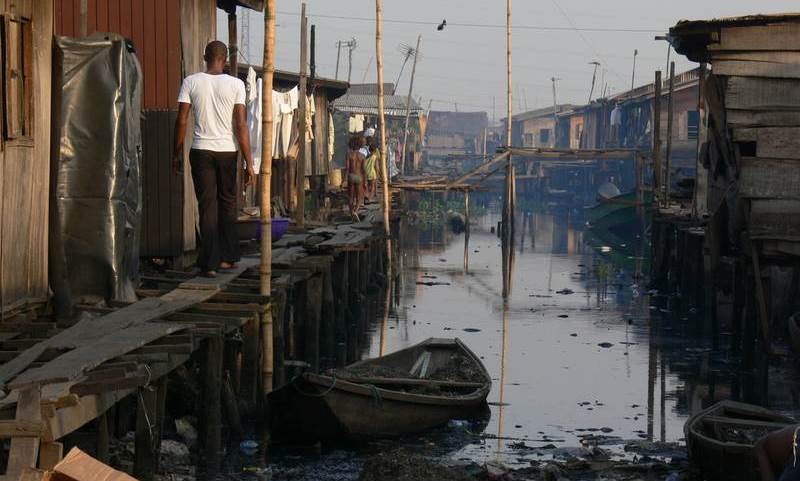 For more than a quarter century, people of Lagos have been forcibly evicted from their homes – a perverse ‘urban renewal’ that has seen upward of 400,000 residents displaced to make way for luxury developments. But the tide could be turning, after a judge ruled that these forced evictions are cruel and inhuman – and violate the right to dignity.

Just after midnight on November 10th 2016, I received a phone call from Otodo Gbame – a fishing village on the edge of the Lagos Lagoon, located in one of the wealthiest areas of the largest city in sub-Saharan Africa. In panic-stricken tones, a resident and community paralegal named Paul told me that a caterpillar excavator had just begun demolishing structures on the far side of the community and was rapidly closing in on his home. At least four police vehicles were working alongside the demolition team; I told him I would start making phone calls.

By the time I finished making calls to police at various levels – all to no avail – others were calling me to report that police were setting their homes on fire. By the time day broke, residents who had fled with their families to boats in the Lagoon were able to take pictures of the excavator and their community in flames. By early afternoon, an estimated 2,400 structures were razed and over 30,000 were homeless.

In Lagos, Nigeria such forced evictions are not new. Since the forced eviction of an estimated 300,000 people from a vast area of Lagos called Maroko in 1990 – then under a military government – scores of demolitions have repeatedly displaced entire communities at once. Since 2013, I have personally witnessed nearly 100,000 people lose their homes, and lifetime’s investments, with no more than a few hours notice and nowhere to go.

Colleagues who work with the urban poor elsewhere in the world, often say that Nigeria is decades behind in reckoning with the reality that forced evictions are counterproductive, further entrench urban poverty, and do not actually create cities without slums or informal settlements.

There are reasons the country lags behind.

First the value of land in Lagos – a city with the fourth densest population in the world – creates strong incentives to grab land. After the urban poor are forcibly evicted, land is most often converted into luxury developments sold at great profit to the urban elite; for example, the vast land where Maroko once sat is now home to exclusive housing estates, luxury hotels, and malls. Second, the legacy of over 30 years of military rule left most non-wealthy Nigerians with a firm belief that “you cannot fight [the] Government.” Finally, the courts – often referred to, with a sigh, as “the last hope for the common man” – have steadfastly refused to protect the poor from evictions or hold land grabbers accountable.

But on January 26 2017, a Lagos judge boldly aligned himself with the jurisprudence of human rights courts around the world when he pronounced that the forced eviction of Otodo Gbame – and the threat of demolition facing 40 other Lagos waterfronts –amounts to cruel, inhuman and degrading treatment and violates the right to dignity.

Just four years earlier, another Lagos judge hearing a case challenging the 1990 demolition in Maroko that had been pending in court for more than 22 years, specifically rejected the same notion. He ultimately decided, outrageously, that there was no violation of human rights in the forced eviction of 300,000 people. Such has been the norm in cases trying to defend the rights of the urban poor over the decades.

The inherent dignity of the human person is a foundation of human rights law from which all other rights emanate. Yet, certain rights – those categorized as economic, social, and cultural rights, including the right to adequate shelter – have been harder to enforce because they are often left out of the bill of rights in many countries’ constitutions. The prohibition on forced evictions is a component of the right to adequate shelter.

In countries like post-apartheid South Africa a new wave of “third generation” constitutional drafting has embraced socio-economic rights as enforceable and essential to the realization of human dignity. As former Justice Arthur Chaskalson of the South African Constitutional Court wrote, “There is no dignity in being compelled to live in conditions of abject poverty without access to [the] basic necessities of life such as food, water, health services and housing.”

So what is starting to bring such vital change to Lagos?

First, following in the footsteps of slum-dweller federations in 33 other countries, a growing grassroots movement with membership from over 80 informal settlements is empowering the urban poor to claim their dignity.

Since October 2016 when the Governor of Lagos announced the state’s intention to demolish all waterfront “shanties” within seven days, the Nigerian Slum/Informal Settlement Federation has organized massive peaceful protests and engaged legislators, the media, a number of foreign diplomats, and the United Nations’ Special Rapporteur for Adequate Housing.

Thousands of people like Paul from Otodo Gbame – evictees and other slum dwellers – have overcome the fear of confronting those in power and are standing together to claim their dignity, calling for an end to forced evictions in Lagos. They are learning that claiming one’s dignity is the first step to having their rightful dignity recognized and reaffirmed.

Megan S. Chapman is a human rights lawyer and the co-founder/co-director of Justice & Empowerment Initiatives – Nigeria (JEI), which supports and works hand-in-hand with the urban poor organized under the Nigerian Slum/Informal Settlement Federation.”

Wenger: I will still be a manager next season