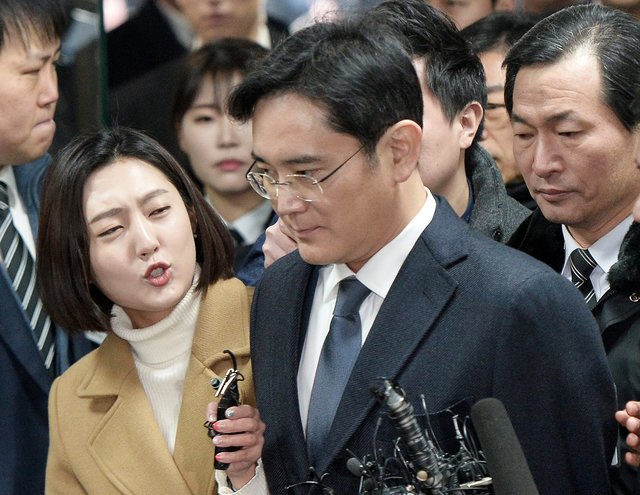 Samsung Group chief, Jay Y Lee, is surrounded by media upon his arrival to the Seoul Central District Court in Seoul

Samsung Group chief Jay Y. Lee was arrested on Friday over his alleged role in a corruption scandal rocking the highest levels of power in South Korea, dealing a fresh blow to the technology giant and standard-bearer for Asia’s fourth-largest economy.

The special prosecutor’s office accuses Lee of bribing a close friend of President Park Geun-hye to gain government favours related to leadership succession at the conglomerate. It said on Friday it will indict him on charges including bribery, embezzlement, hiding assets overseas and perjury.

The 48-year-old Lee, scion of the country’s richest family, was taken into custody at the Seoul Detention Centre early on Friday after waiting there overnight for the decision. He was being held in a single cell with a TV and desk, a jail official said.

Lee is a suspect in an influence-peddling scandal that led parliament to impeach Park in December, a decision that if upheld by the Constitutional Court would make her the country’s first democratically elected leader forced from office.

Samsung and Lee have denied wrongdoing in the case.

Prosecutors have up to 10 days to indict Lee, Samsung‘s third-generation leader, although they can seek an extension. After indictment, a court would be required to make its first ruling within three months.

No decision had been made on whether Lee’s arrest would be contested or whether bail would be sought, a spokeswoman for Samsung Group said.

“We will do our best to ensure that the truth is revealed in future court proceedings,” theSamsung Group said in a brief statement after Lee’s arrest.

The same court had rejected a request last month to arrest Lee, but prosecutors this week brought additional accusations against him.

“We acknowledge the cause and necessity of the arrest,” a judge said in his ruling.

Shares in Samsung Electronics ended Friday down 0.42 per cent in a flat wider market.

Ratings agencies did not expect any impact on the flagship firm’s credit ratings, and said Lee’s arrest would accelerate improvements in management transparency and corporate governance.

While Lee’s detention is not expected to hamper day-to-day operations at Samsung firms, which are run by professional managers, experts said it could hinder strategic decision-making at South Korea’s biggest conglomerate, or chaebol.

Samsung is going through a restructuring to clear a succession path for Lee to assume control after his father was incapacitated by a heart attack in 2014.

Decisions that could be complicated by Lee’s arrest include deliberations over whether to reorganise the group under a holding company structure, as well as its plan to abandon its future strategy office, a central decision-making body that came in for criticism during the scandal.

Staff moves have also been in limbo. Samsung, which employs around half a million people, has yet to announce annual personnel promotions and changes, which it typically does in December.

One employee at Samsung Electronics’ chip division said colleagues were unsettled that prosecutors had singled out Samsung. “The mood is that people are worried,” the person said.

However, another Samsung Electronics employee described the situation as business as usual. “It wouldn’t make sense for a company of that size to not function properly just because the owner is away.”

Both employees declined to be identified, given the sensitivity of the matter.

Lee’s incarceration comes as Samsung Electronics tries to get past last year’s disastrous roll-out of its Galaxy Note 7 smartphones, which were prone to fires. It is under pressure for the upcoming launch of its next flagship phone, the Galaxy S8, to be a success.

Major business groups criticised the decision, worried about the impact on Samsung and the country.

“A management vacuum at Samsung, a global company representing the Republic of Korea, will increase uncertainty and undermine global confidence, posing a big burden on the already struggling economy,” the Korea Employers Federation said.

Lee’s arrest gives a boost to prosecutors who have zeroed in on Samsung to build their case against President Park and her close friend Choi Soon-sil, who is in detention and faces charges of abuse of power and attempted fraud.

Both Park and Choi have denied wrongdoing.

Prosecutors have focused on Samsung‘s relationship with Park, 65, accusing the group of paying bribes totaling 43 billion won ($37.74 million) to organizations linked to Choi to secure government backing for the controversial 2015 merger of two Samsung units, a deal that was seen as key to smoothing Lee’s succession.

The prosecution office on Friday accused Lee of bribery not only in seeking to smooth the merger but in the broader process of his succession. A prosecution spokesman did not elaborate.

If parliament’s impeachment of Park is upheld, an election would be held in two months. In the meantime, she remains in office but stripped of her powers.

Her would-be successors praised the decision to arrest Lee.

“We hope it marks a beginning to end our society’s evil practice of cosy ties between government and corporations and move towards a fair country,” said Kim Kyoung-soo, a spokesman for Moon Jae-in, a member of the liberal opposition Democratic Party who is leading opinion polls in the presidential race.