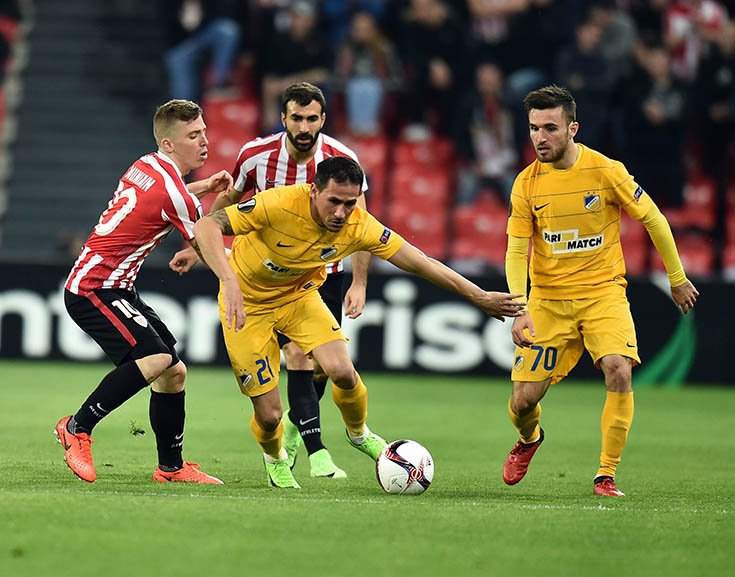 Apoel lost 3-2 to Athletic Bilbao in the Europa League Round of 32 first leg at San Mames on Thursday but a last-minute strike from Gianniotas gives the Cypriots a major chance of qualification in next week’s deciding encounter.

Athletic dominated from the off, and conjured up their first effort early on when Raul Garcia’s left footed lob from the corner of the box deflected off an opposition player, forcing Waterman into a good save to stop and another to collect. Five minutes later, Athletic were in again through some fine wing play by Iñaki Williams but his cross was headed well over by Iker Muniain.

But despite Athletic’s pressure, it was Apoel who took a shock lead. Vinicus’ sweeping through ball found Efrem who whipped the ball to perfection into the far corner.

It was not the first time the pacey winger hit a stunning strike in this year’s Europa League but, just like after his brilliant goal against Young Boys, the joy was short lived.

Two minutes later, the hosts were back on level terms as the dangerous Williams crossed to Balenziaga and the full-back’s effort deflected first off Milanov and then off Merkis for the leveller.

A similar pattern followed in the second half with Athletic piling on the pressure and Apoel happy to protect a draw.

Apoel had succeeded in keeping the lethal Aduriz quiet up until the hour mark but one defensive mistake would be punished. January signing Yambere gifted the ball to Muniain who then fed the Europa League’s top scorer to make it 2-1 with a perfect finish.

The Cypriots’ chances were very limited but they almost had an equaliser on 67 minutes. De Camargo’s powerful header looked to be flying in but veteran Iraizoz made a stunning save to divert the ball out of danger via the post.

On 72 minutes, Williams capped off his excellent performance with a glancing header from Raul Garcia’s cross to make it 3-1.

It was a fully-deserved lead for the Basques, but in the 89th minute of the game, Apoel had the final say. Gianniotas played a one-two with De Camargo before drilling the ball beyond Iraizoz for a priceless second away goal to resurrect the tie ahead of Thursday’s encounter at the GSP Stadium.

Results from the other Europa League matches on Thursday:

I hope this is my turn: West Ham boss Moyes wants Europa glory