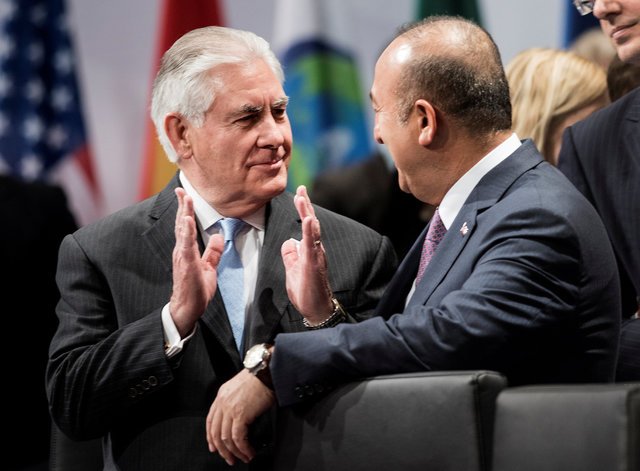 US Secretary of State Rex Tillerson, trying to reassure allies that Washington was not tilting towards Moscow over the Syrian conflict, told them on Friday that the United States backed UN efforts to broker a political solution to the war, officials and diplomats said.

Tillerson also said military ties with Russia hinged on its stance towards rebels fighting the government of President Bashar al-Assad, who Russia backs.

Countries opposed to Assad met on Friday for the first time since Donald Trump took office as US president in a bid to find common ground ahead of UN-backed peace negotiations in Geneva next week.

All eyes have been on Washington and its approach to ending the war in Syria, given promises by Trump to build closer ties to Russia, especially in the fight against Islamic State. His policy on Syria has been unclear.

Western diplomats said that in talks on the sidelines of a G20 foreign ministers’ meeting,Tillerson had stressed the importance of sticking to UN efforts to reach a political solution based on Security Council Resolution 2254 under the special envoy on Syria, Staffan de Mistura.

The envoy will convene a new round of peace talks among Syrian factions next Thursday.

The diplomats also said Tillerson had stressed that Moscow’s position to align itself with the Syrian government to label all rebels as terrorists would make military cooperation between Washington and Moscow complicated.

“In the discussion, he made it clear that there would not be military cooperation until the Russians accepted that not all the opposition are terrorists,” one diplomat said.

Assad is in his strongest position since the early days of the civil war, which began as a popular uprising in the spring of 2011before spiralling into a war that has killed up to 400,000 combatants and civilians.

The United States, along with Gulf Arab States and Turkey, backs rebel forces but the situation is complicated by the role of hardline Islamist factions, including Islamic State, in the anti-Assad movement who are opposed by both Washington and Moscow.

“We ask the Russian backer of the regime to put pressure on it so it stops considering that all the opposition are terrorists,” Ayrault said. “Otherwise, there will be no discussion in Geneva.”

German Foreign Minister Sigmar Gabriel said after the meeting, which included the United States, Saudi Arabia, Turkey, France and Britain, that it was clear that all wanted a political solution.

“This political solution must be achieved in Geneva under the auspices of the United Nations and that there cannot be any parallel negotiations,” Gabriel told reporters.

Russia has sought to revive diplomacy since its air force helped to defeat rebels in Aleppo in December, the Syrian leader’s biggest victory to date. Nearly six years into the war, Assad seems militarily unassailable thanks to the decisive backing of Russia and Iran.

It has held a series of parallel intra-Syrian negotiations in coordination with Turkey and Iran in the Kazakh capital Astana to reinforce a shaky ceasefire and has tried to expand the scope to cover political aspects.

“The Russians are trying to pilot a separate process,” said one diplomat. “Geneva is an extremely fragile process and we want to avoid it being chaotic.”

Carnival fun with the animals

U.N. chief calls for Syria truce before situation ‘entirely out of control’