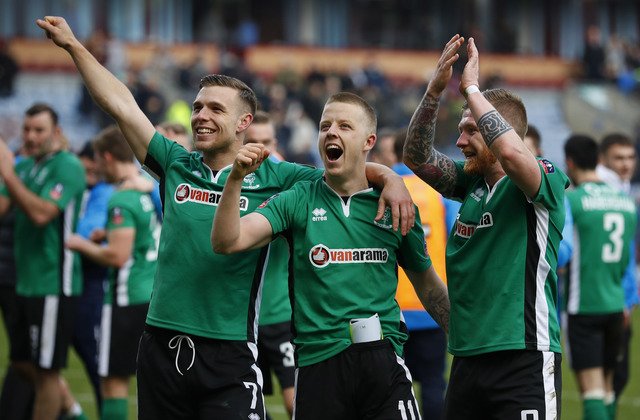 Lincoln City produced a huge FA Cup shock to beat top-flight Burnley 1-0 away and become the first minor league club to reach the quarter-finals for 103 years on Saturday.

On a day of fifth-round toil for the top-flight sides, English champions Leicester City’s problems continued to mount as they went down 1-0 at third-tier Millwall, who played most of the second half with 10 men.

Chelsea, chasing a league and FA Cup double, restored some order with goals from Pedro and Diego earning them a 2-0 win at Championship side Wolverhampton Wanderers, but Manchester City were held to a 0-0 draw at Huddersfield Town.

Middlesbrough quelled a stirring comeback by third-tier Oxford United to win 3-2 at the Riverside Stadium.

The magic of the Cup will continue on Monday when Lincoln’s National League (fifth-tier) rivals Sutton United host Arsenal.

Millwall’s third win over Premier League opposition this season, secured by Shaun Cummings’s 90th-minute goal at the New Den, would ordinarily have topped the shocks.

But they were outdone by Lincoln.

Sean Raggett’s headed goal in the 90th minute continued the dream run of the National League leaders who easily matched a side 81 places higher up the English football ladder and who held Premier League leaders Chelsea to a draw a week ago.

“It’s a football miracle for a non-league team to be in the last eight,” Lincoln’s young manager Danny Cowley said.

“We are realists. I will never ask the players to do something they’re not capable of. But we thought if we could get the game plan right we could compete.”

Burnley had lost only three of their previous 29 home matches in all competitions but failed to make their perceived superiority show in a scrappy game.

Just when it seemed Burnley had gained the upper hand Lincoln were awarded a corner and Raggett rose above a crowd of players to head the ball over the line despite keeper Tom Heaton’s attempt to claw it out.

Lincoln, only the third minor league side to beat top-flight opposition in nearly 30 years, are now just one win away from a semi-final at Wembley Stadium.

Burnley, meanwhile, were the fall guys again, having been beaten by minor league Wimbledon in 1975 when they were also a top-flight side. “My team were nowhere near the level they can show,” manager Sean Dyche said.

Leicester manager Claudio Ranieri made 10 changes for his side’s trip to south London Millwall — his eyes fixed on the his side’s relegation battle and a looming Champions League last-16 tie against Spanish club Sevilla.

Millwall had Jake Cooper sent off in the 52nd minute for a second booking but even a numerical advantage failed to stir a Leicester side who suffered a sucker punch when Cummings was played in by Lee Gregory and fired past Ron-Robert Zieler.

“When it was 10 versus 11 they played better than us with more desire and heart and deserved to win,” said Ranieri, whose side have lost five consecutive league games.

Chris Maguire and Toni Martinez scored within a minute of each other to haul Oxford level at Middlesbrough but their hopes of emulating Lincoln and Millwall were ended four minutes from time when Cristhian Stuani tapped in Boro’s winner.

Take tea at the museum

It’s time for Chelsea to win a final at Wembley, says Mount