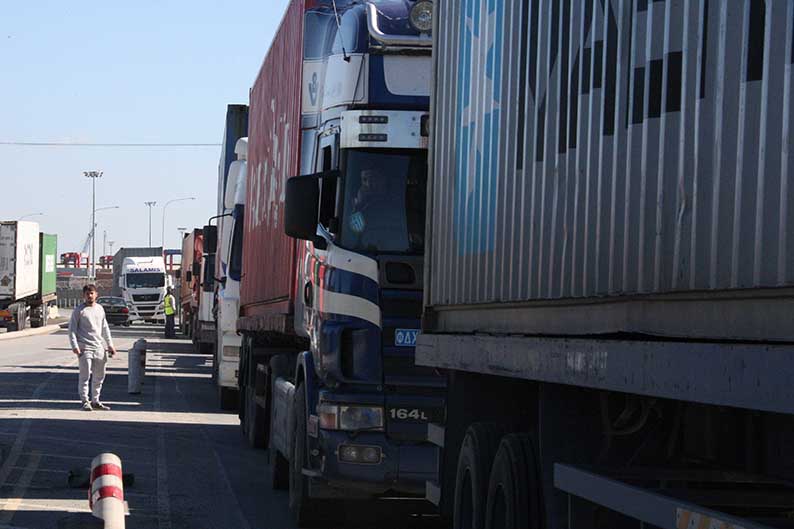 MERCHANTS warned on Friday that should lorry drivers continue to refuse to pick up containers from Limassol port, there will be a shortage of goods in the market very soon with an impact on the economy worth millions of euros.

The prolonged protest by truck drivers outside the container terminal over delays during loading and unloading at the port, led to the stacking of more than 2,000 containers, while the number is increasing by the day, Eurogate said on Friday. Eurogate assumed the responsibility for the container business at the Limassol port in late January.

As negotiations between the lorry drivers, Eurogate and Transport minister Marios Demetriades continue, importers and exporters are not happy waiting for their merchandise to be delivered or picked up at the port.

Importers of foodstuff and pharmaceuticals warn that this could lead to shortages, while farmers say that the delay in the import of products necessary for the cultivation of their crops could hurt their production.

“The continued refusal by truckers to cooperate by picking up goods from the port is irresponsible towards their business clients and by extension workers and consumers who will begin to experience shortages in the market,” the Cyprus Chamber of Commerce and Industry (Keve) said in an announcement. It added that the truckers’ behaviour was “unacceptable and with disastrous consequences” to the economy.

“The port is an essential service for the smooth operation of the state,” Keve said.

According to the chairman of the Employers and Industrialists Federation (OEB), Christos Michaelides, the situation at the port has already had a huge impact on businesses.

“For an exporter, this affects production but it also causes a huge liquidity problem. This concerns not just frozen foodstuff but cars too, as businesses cannot put their products out on the market,” Michaelides told the Cyprus Mail.

The situation is tragic, he said.

“Now is not the time to start putting the blame on anyone, although everyone bears their share of blame as things went wrong – the government agreement with the private investor, Eurogate’s procedures – what’s important is for the ports to resume operations immediately. We all need to work collectively to achieve this,” he said.

Michaelides said that first and foremost, Eurogate needs to get working as regards organisation and technology systems and the rest need to be patient.

For importers, however, patience is running out as they face numerous problems with their goods stuck at the port.

“This had greatly affected businesses and if this continues, there will be shortages in the market,” Antonis Takkos, Logistics Officer at Vassos Eliades told the Cyprus Mail.

“Our main product, Nescafe, is at the port. There are products no longer in stock,” Takkos said.

He added that as goods remain at the port companies face additional costs imposed by shipping lines for every container held up due to the delays, but there are no clear answers from the port as to where the problem lies.

But the chaotic situation at the port has also affected the import of pharmaceuticals slated for state hospitals.

Avgoustinos Potamitis, chairman of the Cyprus Pharmaceutical Association (CPA), did not rule out the possibility of shortages, depending on the duration of the protest of lorry drivers.

He too said that except possible shortages, financial problems would follow.

“Importers will pay a fine for each day of delay in the delivery of the drugs to the state pharmaceutical services,” Potamitis said.

“We have sent a letter to the health minister to be lenient as this is no fault of the importers”. He added that priority should be given to the unloading and transport of pharmaceuticals.

“It is unthinkable to leave drugs in the containers when people need them most,” he said.

Farmers too sounded the alarm over delays in the delivery of products necessary for the cultivation of their crops.

The Ecological Farmers’ Association said on Friday that it has received scores of complaints from its members over delays in the customs clearance of agricultural supplies.

“The economic damage to be suffered by farmers and our state, in general, will be enormous,” the group said.

Keve said that it would urge its members to claim compensation from truck drivers for the damage suffered due to their prolonged work stoppage. Truckers, who rejected any proposals made so far, said that they would continue their protest until Monday.

Our View: Economic recovery should not be taken for granted

New House president asks police to reduce his security detail, ‘no need’ for them