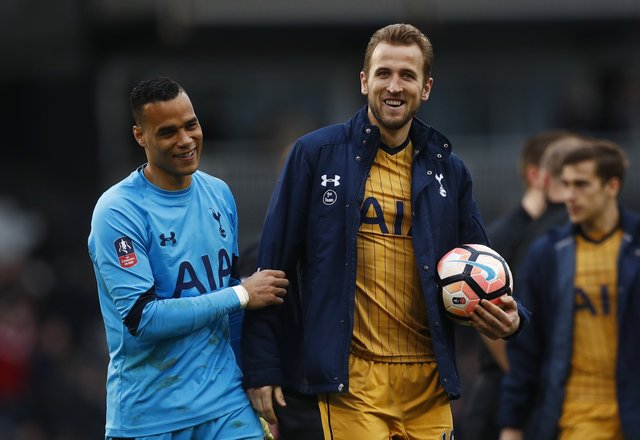 Harry Kane’s hat-trick turned Tottenham Hotspur’s potentially tricky FA Cup fifth-round tie at Championship side Fulham into a Sunday stroll by the River Thames as they won 3-0 at Craven Cottage.

England striker Kane struck early on and twice after the interval to take his tally for the season to 19 as the eight-times FA Cup winners eased into the quarter-finals.

Fielding a strong team with defender Jan Vertonghen back from injury they quickly hit their stride and Kane opened the scoring in the 16th minute when he stretched to volley in Christian Eriksen’s teasing low cross.

He doubled Tottenham’s lead in the 51st minute, again from an Eriksen assist, and finished off Fulham in the 73rd minute when he ran unopposed on to Dele Alli’s pass and tucked a right-foot shot past Fulham goalkeeper Marcus Bettinelli.

Fulham, still with an outside chance of making the Championship playoffs, had their moments and former Tottenham midfielder Scott Parker nearly grabbed a consolation when his header was saved by Spurs keeper Michel Vorm.

Tottenham, looking to win the FA Cup for the first time since 1991, will find out who they play in the quarter-finals when the draw is made after holders Manchester United take on Blackburn Rovers later on Sunday.

Victory helped Tottenham end a mini-slump in which their Premier League title hopes were severely dented by a 2-0 defeat at Liverpool followed by a Europa League defeat at Gent.

Manchester United’s Zlatan Ibrahimovic came off the bench to score the winner as they recovered from an early deficit to beat Championship strugglers Blackburn Rovers 2-1 away in the FA Cup fifth round on Sunday.

Rovers, whose priority is to avoid relegation to English soccer’s third tier, took the lead in the 17th minute through Danny Graham but Marcus Rashford levelled before halftime.

Twelve-times FA Cup winners United dominated the game after the break at Ewood Park but had to wait until the 75th minute for Ibrahimovic to slot the winner after being set free by a precise long pass delivered by fellow substitute Paul Pogba.

It was Swede Ibrahimovic’s first goal in the FA Cup and 24th in all competitions this season.

Blackburn thought they had scrambled a late equaliser when Anthony Stokes poked the ball home but a linesman’s flag cut short the celebrations.