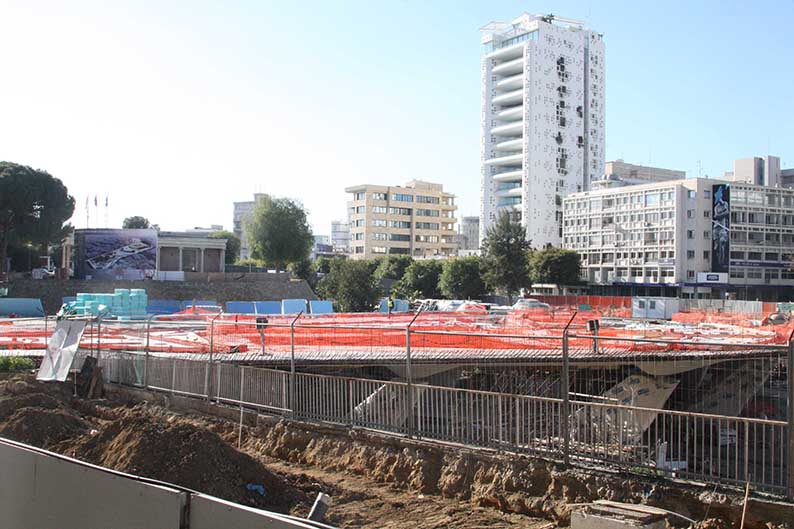 March 31 is the latest official deadline for completion. It will be missed, yet again

EUROPEAN Union funding for the Eleftheria Square do-over is at serious risk of being lost if the ambitious project is not finished by the end of the year, the Directorate-general for European Programmes’ Charis Soteriou has told the Sunday Mail.

Soteriou, the government’s designated contact point for EU structural funds funnelled to Cyprus for cohesion policy – under which the application for Eleftheria Square was filed and approved for EU funding – said that the project was approved for funding of 85 per cent of its total cost from European structural funds in the previous programme, which ran from 2007 to 2013.

“We got it included in the new programme, but there are going to be serious questions if it’s not finished by the end of the year,” Soteriou said.

EU funding for work done so far has been claimed, and received, but the answer to who will be stuck with the bill if the end-of-2017 deadline is missed is a pretty straight-forward one.

“How it works is, you pay the contractors in full per the agreement and then you go back and claim what you are entitled to from the EU funds,” the Cypriot official said, adding that the funding programme covers budget overflows, too.

The entire project, comprising the construction of the square and a bridge, as well as a two-level underground parking area, was originally estimated to cost €23 million.

To address huge delays and the rocky coordination between the contractor and the architects who designed and oversaw it, the Nicosia municipality decided in 2014 to break up the project into two smaller ones, with the square and the bridge in one, and the parking space in the other, awarding the contract for the first to a different contractor and keeping the second on the back burner.

One estimate has the total cost of the sole remaining ongoing contract at €23 million.

Following decades of rumination, the Eleftheria Square facelift was kicked off in 2005, when an international competition was announced for its design, eventually won by the world-famous London-based architecture and design firm founded by the late Dame Zaha Hadid.

The final design was unveiled in 2011, and the original plan was for the square to be ready by June 2012, when Cyprus was to chair the European Council and would regularly host European leaders for the following six months.

But work was underway only in February 2012, when Miltiades Neophytou contractors won the job and started construction.

Per the deadlines agreed to at the time, the bridge was supposed to have been finished by June 2013. (It wasn’t, and it still isn’t.)

In July 2013, a metal bridge was set up over the construction site, to connect Stasinou Avenue in the contemporary part of town with Constantinou Paleologou street in old Nicosia. Although announced as “temporary” at the time, the bridge remains the only crossing point between the two areas four years on, and is used by hundreds of pedestrians on a daily basis.

Turf wars between the contractor and the architects soon broke out over who was responsible for the delays, which kept pushing deadlines back, with the construction firm claiming it was not being given adequately detailed marching orders and that the architects did not monitor progress properly, and the municipality claiming the construction company was simply not up to the task of managing a project of this magnitude.

At some point, the contractor even warned he would only stay on the project if the architects were let go.

Instead, the Neophytou firm was released of its contractual obligations by the municipality in February 2014, in exchange for about €0.5 million in compensation – and about €5.5 million’s worth of construction work done and paid for – and new competitions for the construction of the square and the bridge, and a separate one for the parking area, were opened.

But at least six months were lost before a new contractor was found, because the municipality decided to deliberately low-ball the estimated cost when it invited tenders, in hopes of attracting lower bids.

“On the one hand, the municipality was not entitled to publish an intentionally lower cost estimation, and, on the other, doing so may have prevented bidders from participating in the competition,” Auditor General Odysseas Michaelides said in his 2015 annual report.

Not surprisingly, the trick didn’t work, and the lowest bid came in at 55 per cent higher than the ‘estimated’ cost, whereas the parking competition was cancelled because of suspicions of collusion among the five bidders.

The square competition was also cancelled, because none of the bids met the budget criterion, and a new one was opened, which was finally awarded in November 2014.

Lois Builders, the new contractors, got to work on the square in January 2015 against a March 2016 completion deadline, which was extended to June 2016 at their request and approved by the project’s architects.

Both finishing dates were missed, as was a subsequent one announced by Mayor Constantinos Yiorkadjis when he said the square would be done by the end of 2016.

The end-of-year milestone was then pushed further back, and the contractors are now supposedly working against an end-of-March deadline, which is looking highly improbable.

Although both the municipality and the contractors declined comment for this piece, small tell-tale signs point to the project remaining far from completion.

A patch of road adjacent to the start of the iconic Ledra Street in the old town, on one side, and the construction site on the other, was closed to car traffic a few months ago, and replaced with a makeshift opening inside the pedestrianised commercial street.

The solution caused heavy traffic jams at the spot and great inconvenience to pedestrians, but it seems that the construction work that necessitated it is not even close to being finished, because the spot was tarmacked over two weeks ago.

(Suggestive clues notwithstanding, of course, the pervasive secrecy of the project-runners over even a rudimentary progress report is hardly encouraging.)

Once aspiring to drastically rejuvenate the city centre and bestow the capital the grandeur it deserves, the Eleftheria Square has become little more than an open wound: for residents and visitors, scrambling to and from the area through ‘temporary’, ineffectual diversions; for local businesses, which continue to suffer what is tantamount to a customer blockade; above all, to the Nicosia municipality, which has seen what it hoped would be its crowning achievement turn into a source of seemingly unending embarrassment.

Our View: Anastasiades is starting to sound like the rejectionists