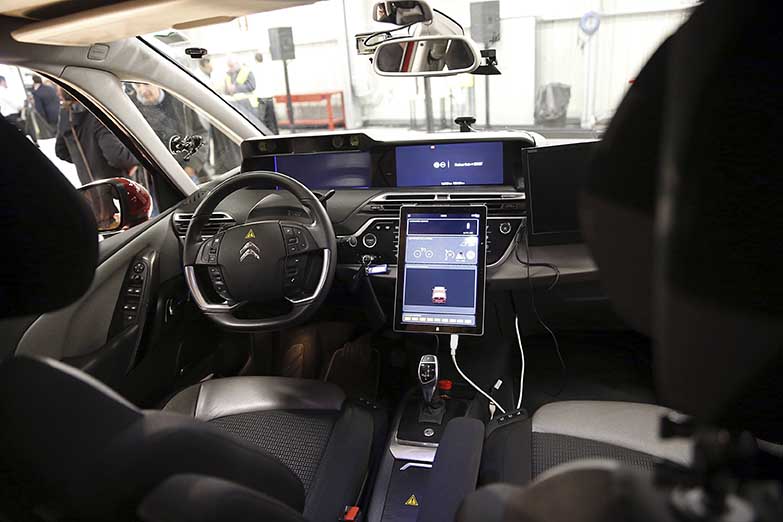 Self-driving cars that are now being road-tested will eventually destroy most of the 4.5 million driving jobs in the USA

There’s a new idea that might be the solution to runaway populism. Well, it’s not that new, really – it has been kicking around in left-wing circles for a least a quarter-century – but it has suddenly gone mainstream. It’s called Universal Basic Income (UBI), and pilot programmes to see if it really works in practice are being launched this year in four different countries.

It’s populism that gave us Brexit in Britain and President Donald Trump in the United States. It could soon give us President Marine Le Pen in France. But the fundamental lie of populism is that it can “bring the jobs back”. It doesn’t even admit where they really went.

Indeed, in the 2016 presidential campaign in the United States neither candidate ever mentioned the ghost at the feast. Donald Trump promised to “bring the jobs back” from the foreign countries that had “stolen” them, mainly by ending free trade, while Hillary Clinton promised “a full-employment economy where everybody has enough to raise a family and live in dignity”. Neither of them ever mentioned automation.

This is curious, because the great killer of jobs throughout the developed world for the past two decades has been automation: computer-controlled machines replacing human workers.

Hundreds of thousands of ATMs (Automated Teller Machines) have replaced hundreds of thousands of human bank tellers. Seven million industrial jobs in the United States have been eliminated in the past 35 years by automation, while factory production has actually doubled. And the self-driving cars that are now being road-tested will eventually destroy most of the 4.5 million driving jobs – long-distance trucks, taxis, and delivery vans – in the USA.

I can watch what automation is doing in my own neighbourhood. There’s a big supermarket a five-minute walk from my house, and I’m in there almost every day to pick up something or other. Over the years I have got to know most of the people at the check-out counters, at least enough to chat a bit. And now the familiar faces are disappearing, one or more every month, to be replaced by automated self-checkout stations.

And don’t be fooled by the fantasy that computers create equal numbers of new jobs when they destroy old ones. When you lose your secure, well-paid job to a machine, you may end up with a minimum-wage MacJob if you are lucky, but you are just as likely to end up with no job at all.

It is the anger of millions of people in this situation that broke normal voting patterns and provided the extra votes that gave the Brexit campaign victory in last June’s referendum in Britain and made Donald Trump president in the US election in November. As automation continues to spread, the anger (and the reckless lies of populist politicians) will only get worse.

The automation will continue to spread. The estimated impact over the next twenty years includes the loss of 47 per cent of all existing jobs in the United States, 57 per cent in Europe, and a stunning 77 per cent of manufacturing jobs in China. That could mean a lot more anger, a lot more populism, and conceivably even the collapse of democracy.

It is also dawning on the owners and chief executive officers of major enterprises that if half the population are impoverished by long-term unemployment, they will not be able to buy the goods and services that the capitalist economies produce. That could lead to the collapse of their whole business model, so the right wing is now starting to look into UBI too.

The principle of UBI is that every citizen gets a basic income that allows them to maintain a decent standard of living WHETHER THEY ARE EMPLOYED OR NOT. They may also choose to work in order raise that standard of living, and that income would be taxed (probably quite heavily), but it would still be possible to get rich. This is about saving capitalism, not ending it.

Why do it this way, rather than just giving the unemployed some money? Because that is humiliating for them, and the humiliation feeds the anger. If everybody gets it, there is no shame in taking it.

Where would the money to fund UBI come from? Part would come from ending all existing government social payments: if you are getting UBI, you don’t need unemployment pay or an old-age pension. But heavy taxes on financial services and on automated factories and services would certainly be needed as well.

The biggest question is how many people would still choose to work if everybody was getting the Universal Basic Income. If 47 per cent of today’s remaining jobs are being done by automated machines in 20 years’ time, then 53 per cent of today’s jobs will still need to be done by people.

Finding the answer to that question is one of the main purposes of the new pilot programmes. They are getting underway this year in Canada (in the province of Ontario), in the city of Utrecht in the Netherlands, and in Finland. Others are being considered in Scotland and in Italy. Something big may be starting to happen.

Appeal against a town planning decision