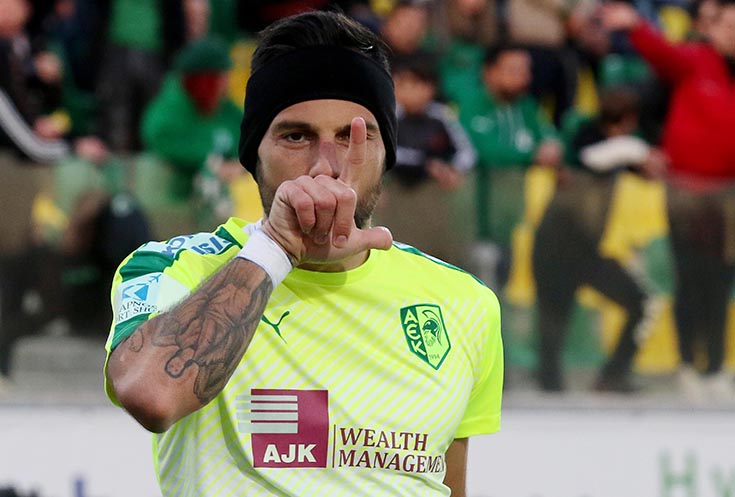 AEK Larnaca were the easy winners in the weekends top game against Omonia, while Anorthosis moved even closer to a top six finish following their 4-2 win over Ethnikos Achnas.  Apollon had no problems in overcoming Karmiotissa, while Aris and Doxa recorded important wins against Anagennisi Dheryneias and Nea Salamina respectively in their battle to beat the drop.

AEK’s emphatic 4-2 win over Omonia confirmed the Larnaca team’s recent improved performances, only this time it was accompanied by the result it deserved.

“We wanted wins against Apoel and AEL but we were unlucky, it was crucial today to play well again, but we needed the three points as well at this crucial juncture of the championship,” said AEK’s coach Imanol Idiakez after the game.

Idiakez’ outfit was the better side from the first whistle and could have taken the lead as early as the 13th minute, but Larena’s free-kick hit the post with Omonia’s keeper Dario Krešić well beaten.

Ten minutes before the break AEK were rewarded for their endeavors as Murillo rose above all to guide the ball beyond Krešić following a Larena corner. Seven minutes later Acoran was on hand to fire in AEK’s second goal, finishing off a great move involving Ortiz and Larena before the Spaniard fired past Krešić.

Early in the second half Ivan Trickovski got a third for his team from the penalty spot and AEK were cruising. Omonia did manage to pull a goal back through Christofi but Florian Taulemesse restored AEK’s three goal lead with a superb strike twenty minutes from the end.

Omonia’s winter signing Nicandro Breeveld scored with virtually the last kick of the ball but as Omonia’s coach John Carver said in the post-game press conference, “I have no excuses, we were beaten by a better team. For me AEK is the best team in the league.”

Anorthosis came back from behind with three goals in the last twenty minutes against Ethnikos Achnas and moved three points clear in sixth place.

Andre Alves, Anorthosis’ winter signing from AEK, was the star of the show as he netted a hat-trick taking his tally to four since his January move.

Ethnikos, who were also in the hunt for sixth place, had led through goals from Zelayia and a Santos own goal with Andre Alves scoring in between.

In the final third of the game Anorthosis upped the pressure and managed to take the three points thanks to two more goals from Alves with Victor getting the fourth.

Ermis Aradippou appear to be the only team capable of challenging Anorthosis for sixth place as they defeated AEZ by 4-0 with Mashinya getting a hat-trick while Nea Salamina, another top six hopeful, lost at home to relegation candidate Doxa Katokopias.

Aris moved further away from the relegation zone with a comfortable 4-0 win over Anagennisi, while in the final weekend game Apollon kept up the pressure on the leaders (Apoel and AEL) with an easy 3-0 over Karmiotissa.

Highlights of the weekend’s games:

‘Corruption in Cyprus football puts our country to shame’

Omonia and Man United drawn together in Europa League