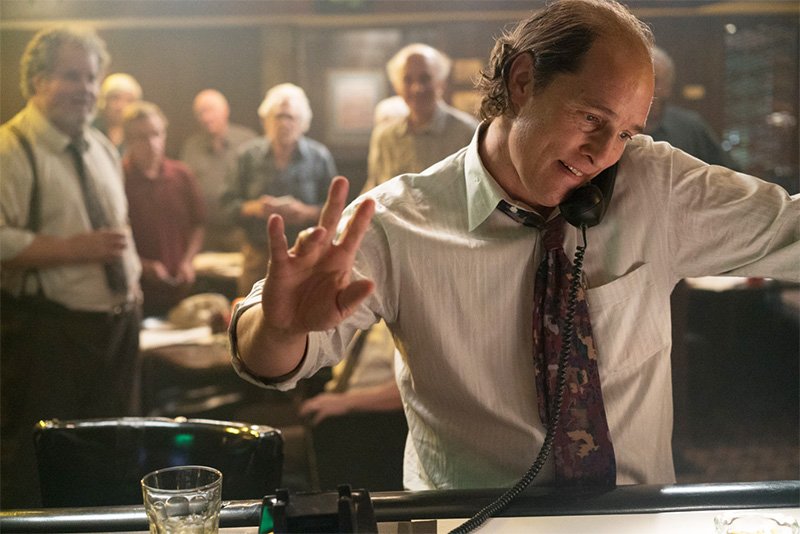 Matthew McConaughey lost a ton of weight for Dallas Buyers Club, and won an Oscar. Now he’s gained a ton of weight for Gold – and maybe he should win an anti-Oscar, though in fact his performance has been widely liked. Admittedly, it’s entertaining, with the ageing heartthrob sporting a beer-belly and deeply misguided comb-over as shady businessman and gold prospector Kenny Wells – but the film itself is crushingly predictable, following a based-on-fact trajectory last seen just a few months ago in War Dogs: colourful small-timer spots money-making opportunity in exotic land (in this case Indonesia) and finally makes it big after years of hustling, only to find that success makes a poor fit with his impulsive personality.

With hindsight, the film should’ve been structured more daringly. The last 15 minutes are the best (I won’t spoil what happens, but there is a sting in the tail) and could’ve been used as a focal point for a much more fragmented script – something like Syriana, the smart and hard-to-follow political drama written by Stephen Gaghan (this film’s director) in 2005. Gold does surprise us in the middle, when what sounds like a rather stale voice-over – “It’s like I was being called. It was the gold calling!” – turns out to be an FBI interrogation, but by then it’s too late. Too many clichés have already been cemented, from the 80s setting and rascally hero to the linear rise-and-fall structure itself.

At one point, Wells playfully complains that Michael Acosta (Edgar Ramirez), his partner in prospecting, talks “like a book on tape” – which is true, Acosta being a dashing geologist and ‘river walker’ who says dashing things like “This jungle will test you”, but it’s also true that Wells himself talks like a screenwriter’s idea of a larger-than-life rogue. These are my people, he raps charismatically, “the hustlers and scrappers, the make-it-happen motherf***ers”, making his pitch to investors like a Pentecostal preacher talking Jesus. “And that’s money!” he roars triumphantly, making the universal gesture for money with both hands (he also talks feelingly of “making the dollar holler”). As an opportunity for a movie star to ham it up and enjoy himself, it’s amusing enough – but it’s not too convincing, especially since we all know this straw-man exuberance is merely a prelude for the drama to come. The only question is whether Wells will end up merely chastened, like Jordan Belfort in The Wolf of Wall Street (where McConaughey had a hilarious cameo), or face-down in some Third World gutter, especially after he starts cutting deals with the Indonesian ruling family.

Indonesia features heavily in the first hour of Gold, yet it doesn’t have much personality. There are mountain landscapes – where Wells and Acosta hunt for gold – tropical rain and malaria, urgent music on the soundtrack, but little in the way of distinctive detail. The film is largely superficial except where its hero is concerned, its most nagging flaw being perhaps Wells’ girlfriend Kay, played by Bryce Dallas Howard. It’s no secret that Ms. Howard is among the finest actresses in Hollywood – yet this role is almost offensive, a dull bimbo character who’s unaccountably besotted with the sleazy, unattractive Wells, stands by meekly while he makes his fortune and points out where he plans to build a house for them, then abandons him when ‘rise’ turns to ‘fall’. Ramirez is also underserved by the script, his character often invisible in the second half; “I told you so!” cries Acosta after Wells makes some colossal blunder – but in fact, if he did, we never saw it. Gold is a one-man show, for better and worse.

The bottom line is gold, of course – gold, “like a drug”, like a calling, like a god. Christopher Columbus mentioned God 26 times in his pitch to Queen Isabella, says Wells gleefully – but he mentioned gold 114 times! Gold is better than sex, an analogy implied early on when our hero illustrates the obviously phallic process of drilling, with a woman’s violated handbag as Mother Earth.

Gold gives Gold a certain outrageous energy, especially when the action moves from mountainsides to boardrooms and the drooling inquiries of Wall Street bankers, all of them blinded by gold. This is quite a lively movie, and it does get better as it goes along – but we’ve now had a few examples of mid-level Hollywood product (i.e. neither popcorn movies nor Oscar contenders) at the multiplex in recent weeks, and it’s not looking great. The Space Between Us was leaden, A Cure for Wellness is sumptuous but barely coherent, and now Gold is mostly unimaginative, with a hammy lead performance. When it comes to ideas, big-studio films seem to be running on empty. No amount of gold is going to fix that.

Review: Everyone Knows Your Mother is a Witch by Rivka Galchen

Is it ethical to watch Marvel movies?

TV Shows we love: The Deuce