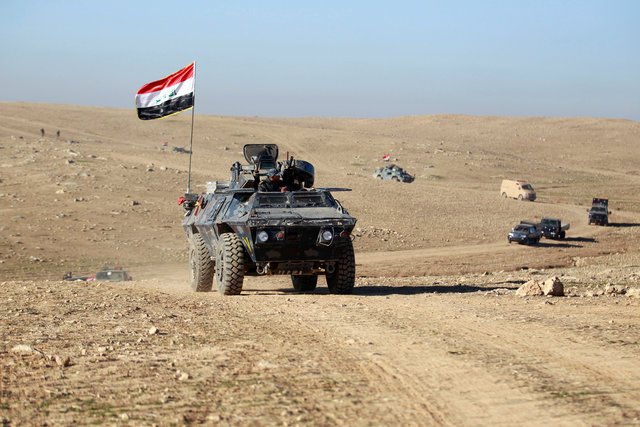 US-backed Iraqi forces fought Islamic State fighters on Monday to clear the way to Mosul’s airport, on the second day of a ground offensive on the jihadists’ remaining stronghold in the western side of the city.

Federal police and elite interior ministry units known as Rapid Response are leading the charge toward the airport, located on the southern limit of the Mosul, trying to dislodge the militants from a nearby hill known as Albu Saif.

The Iraqi forces plan is to turn the airport into a close support base for the onslaught into western Mosul itself.

Islamic State militants are essentially under siege in western Mosul, along with an estimated 650,000 civilians, after they were forced out of the eastern part of the city in the first phase of an offensive that concluded last month, after 100 days of fighting.

“They are striking and engaging our forces and pulling back towards Mosul,” Major Mortada Ali Abd of the Rapid Response units told a Reuters correspondent south of Mosul. “God willing Albu Saif will be fully liberated today.”

Helicopters were strafing the Albu Saif hill to clear it of snipers, while machine gun fire and rocket propelled grenades could be heard. The advancing forces also disabled a car bomb – used by the militants to obstruct attacking forces.

The Iraqi forces have been advancing so far in sparsely populated areas. The fighting will get tougher as they get nearer to the city itself and the risk greater for the civilians.

Up to 400,000 civilians could be displaced by the offensive as residents of western Mosul suffer food and fuel shortages and markets are closed, United Nations Humanitarian Coordinator for Iraq Lise Grande told Reuters on Saturday.

Commanders expect the battle to be more difficult than in the east of the city, which Iraqi forces have took control of last month after three months of fighting, because tanks and armoured vehicles cannot pass through its narrow alleyways.

The militants have developed a network of passageways and tunnels to enable them to hide and fight among civilians, disappear after hit-and-run operations and track government troop movements, according to residents.

Western Mosul contains the old city centre, with its ancient souks, government administrative buildings, and the mosque from which Islamic State leader Abu Bakr al-Baghdadi declared his self-styled caliphate over parts of Syria and Iraq in 2014.

The city is the largest urban centre captured by Islamic State in both countries.

Islamic State was thought to have up to 6,000 fighters in Mosul when the government’s offensive started in mid-October. Of those, more than 1,000 have been killed, according to Iraqi estimates.

The remainder now face a 100,000-strong force made up of Iraqi armed forces, including elite paratroopers and police, Kurdish forces and Iranian-trained Shi’ite paramilitary groups.

The westward road that links the city to Syria was cut in November by the Shi’ite paramilitary known as Popular Mobilization forces. The militants are in charge of the road that links Mosul to Tal Afar, a town they control 60 km (40 miles) to the west.

Coalition aircraft and artillery have continued to bombard targets in the west during the break that followed the taking of eastern Mosul.

The United States, which has deployed more than 5,000 troops in the fighting, leads an international coalition providing key air and ground support, including artillery fire, to the Iraqi and Kurdish forces.

US Defence Secretary Jim Mattis who arrived in Baghdad on Monday on an unannounced visit, declined to offer details about US battle plans when speaking to reporters on Sunday.

“The coalition forces are in support of this operation and we will continue … with the accelerated effort to destroy ISIS,” he said, using an acronym for the militant group.

Mattis also said the US military is not in Iraq to seize the country’s oil, distancing himself from remarks by President Donald Trump.

Islamic State imposed a radical version of Islam in Mosul, banning cigarettes, televisions and radios, and forcing men to grow beards and women to cover from head to toe. Citizens who failed to comply risked death.

Capturing Mosul would effectively end the Sunni group’s ambitions for territorial rule in Iraq. The militants are expected to continue to wage an insurgency, however, carrying out suicide bombings and inspiring lone-wolf actions abroad.

About 160,000 civilians have been displaced since the start of the offensive in October, UN officials say. Medical and humanitarian agencies estimate the total number of dead and wounded – both civilian and military – at several thousand.

“This is the grim choice for children in western Mosul right now: bombs, crossfire and hunger if they stay – or execution and snipers if they try to run,” Save the Children said, adding that children make up about half the population trapped in the city.

Trump’s defence chief, in Iraq, says: We’re not here for your oil