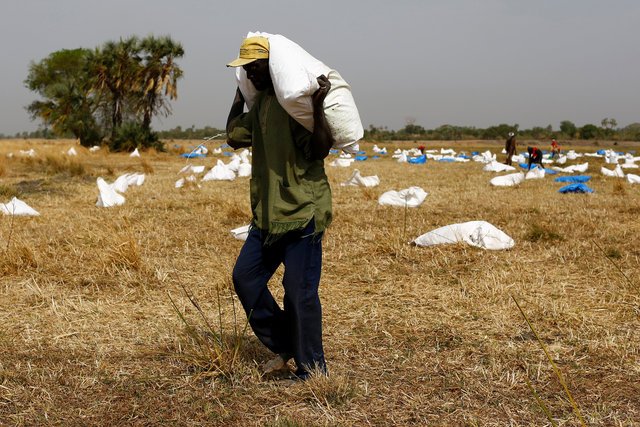 Parts of war-ravaged South Sudan have been hit by famine, a government official said on Monday, saying nearly half the country’s population would lack reliable access to affordable food by July.

Oil-rich South Sudan has been mired in civil war since 2013, when President Salva Kii fired his deputy. Since then the fighting has increasingly split the country along ethnic lines, leading the United Nations to warn of a potential genocide.

The fighting has prevented many farmers from harvesting their crops while hyper inflation which reached more than 800 per cent last year has put the price of imported food beyond the reach of many.

Parts of the country have also been hit by drought.

“In greater Unity (state), some counties are classified in famine or … risk of famine,” Isaiah Chol Aruai, chairman of South Sudan’s National Bureau of Statistic, told a news conference in Juba.

Aruai said the impact of the war, combined with high food prices, economic disruption and low agricultural production was expected to make 4.9 million people what is termed “food insecure” between February and April, with that number rising to 5.5 million by July.

“Famine has become a tragic reality in parts of South Sudan and our worst fears have been realised,” Food and Agriculture Organisation (FAO) South Sudan representative, Serge Tissot, said at the same news conference.

According to the United Nations, famine is declared when at least 20 per cent of households in an area face extreme food shortages, acute malnutrition rates exceed 30 per cent, and two or more people per 10,000 are dying per day.

The fighting has uprooted more than 3 million people and a UN report released on Monday said continuing displacement presented “heightened risks of prolonged (food) underproduction into 2018”.

Many parts of the country are very hard to reach. Six years after independence from neighbouring Sudan, South Sudan only has only 200 km (120 miles) of paved roads in a nation the size of Texas. Fighting also impedes aid delivery; warehouses have been looted and aid workers have been killed.

This month, in a sign the war was taking a turn for the worse, Kiir’s government has been hit by high-profile defections.

Punishments handed out to some soldiers from the Dinka, Kiir’s tribe, for crimes including rape and murder were being set aside, Colonel Khalid Ono Loki, one of officials who resigned said. The minister of labour has also defected to the rebels.

Trump’s defence chief, in Iraq, says: We’re not here for your oil