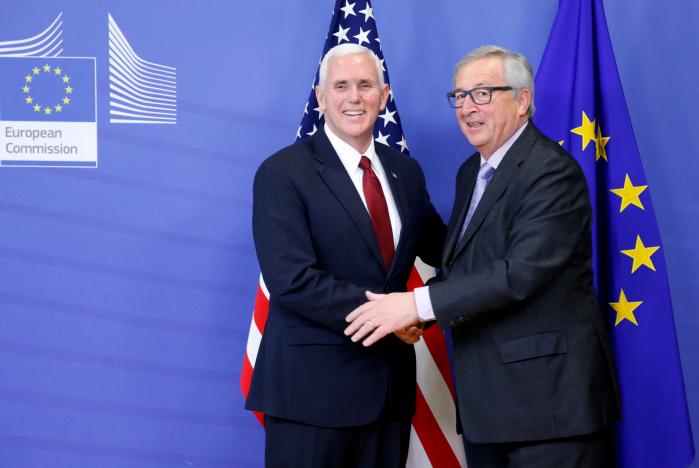 US Vice President Mike Pence sought to reassure the European Union in Brussels on Monday that the Trump administration will maintain and develop decades of partnership in trade and security.

Donald Tusk, who chairs the European Council of EU leaders, told reporters that Pence gave him affirmative answers when asked about his view on three key issues – the importance of the international order based on international law, security based on NATO and the idea of a united Europe.

“After such a positive declaration, both Europeans and Americans must simply practise what they preach,” he said in a statement after the two men met.

President Donald Trump alarmed EU leaders by endorsing Britain’s decision to leave the bloc and by suggesting last month that other states might follow. Pence spent the weekend in Germany seeking to reassure Europeans that Trump was committed to the NATO defence pact, but left some unconvinced.

Pence said Trump had asked him to come to Brussels, the home of the European Union, with an additional message.

“Today is my privilege on behalf of President Trump to express the strong commitment of the United States to continue cooperation and partnership with the European Union,” he said.

“Whatever our differences, our two continents share the same heritage, the same values and above all, the same purpose to promote peace and prosperity through freedom, democracy and the rule of law. And to those objectives we will remain committed.”

EU officials said they had been reassured by Pence about not only continued partnership between Washington and European states but also with the EU institutions in Brussels. He also told them Trump supported the continued cohesion of the Union.

Europeans can still question how far Pence speaks for Trump but EU officials said the vice president had made a good impression and sought to smooth feathers ruffled by Trump’s abrasive public style.

Tusk, a former Polish prime minister, referred in his comments to United States support, under then president Ronald Reagan, of the Polish people suffering under martial law imposed by the Communist government in 1981 and of the historic role of some US and European leaders.

Pence, who Tusk said had recalled a youthful visit to Cold War divided Berlin in the 1970s, said history showed that, when the United States and Europe were peaceful and prosperous, the whole world benefited and that the two should be united in combating Islamist militants and Russian efforts to redraw international borders by force.

Former president’s antiquities donated to the University of Cyprus