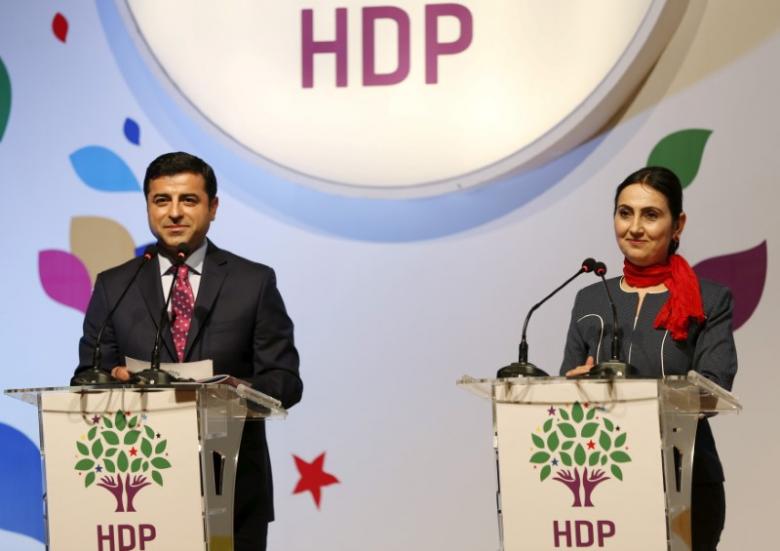 Turkey‘s main pro-Kurdish opposition party said on Monday it had appealed to the European Court of Human Rights over what it said was the unlawful imprisonment of its two leaders on terrorism-related charges.

The arrest last November of the leaders of the Peoples’ Democratic Party (HDP) drew international condemnation over what rights groups say is a widening crackdown on dissent under President Tayyip Erdogan.

The arrests have left parliament’s second-largest opposition party without its elected leadership as campaigning begins for an April 16 referendum on extending the president’s powers. The HDP, which says as many as 5,000 of its members have also been detained, opposes the changes.

“The continuing imprisonment pending trial of the co-chairs of the HDP … constitutes a violation of the right to freedom and security, freedom of speech and the right to free elections,” the HDP said in a statement.

“The situation is particularly critical as Turkey is now heading for a referendum,” it said.

Prosecutors are seeking jail terms of up to 142 years for HDP leader Selahattin Demirtas and 83 years for co-leader Figen Yuksekdag on charges including managing a terror organisation, inciting violence, and terrorist propaganda, according to a court indictment seen by Reuters last month.

Erdogan and the government say the HDP is an affiliate of the militant Kurdistan Workers Party (PKK), which has waged an armed insurgency in Turkey‘s largely Kurdish southeast for more than three decades.

The HDP denies direct links to the outlawed group and says it wants to see a return to peace talks between the government and the PKK, which is considered a terrorist organisation byTurkey, the United States and the European Union.

Erdogan has seized on the HDP’s opposition to constitutional change to argue that those who vote “no” in the April referendum will be siding with supporters of terrorism.

The plans would replace Turkey‘s current parliamentary system with an executive presidency. Erdogan’s supporters say the change will give Turkey stronger leadership, but critics say it will lead to one-man rule and erode basic freedoms.

Turkey is one of the 47 member states of the Council of Europe and a signatory of the European Convention on Human Rights (ECHR), from which the Strasbourg-based court draws its authority. Its powers to enforce decisions are limited.

Just over a year ago, the ECHR turned down requests that it call for an end to curfews in Turkey‘s largely Kurdish southeast, where security forces were battling the PKK, although it said Ankara should ensure access to medical treatment.