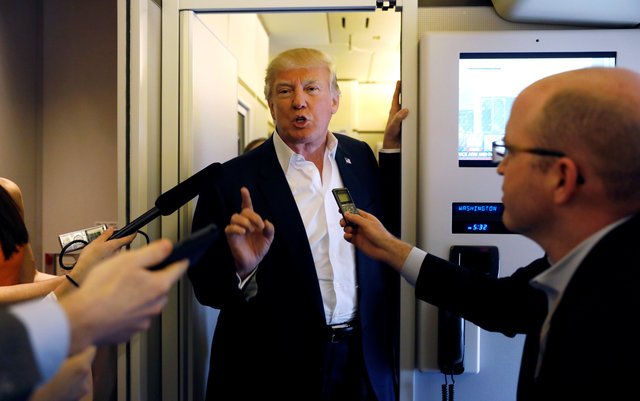 The White House said in a statement on Tuesday that Trump, as head of the Trump Organization, had a responsibility "to pay no more tax than legally required."

THE United States is going through political turmoil. Questions are raised about “government”, the President and how authority is managed.  I am examining this aspect by taking a snapshot of the way in which authority is playing in the hands of the new President, Mr. Donald Trump.

The authority I refer to in this comment is legitimate authority bestowed on someone like the president which provides the holder of that Office the legitimate right to exercise power to discharge obligations, choices, define policy and take whatever action deemed necessary but always under and within the specified legal parameters and the constitution which define the position, role and authority of the executive.

Normally, in exercising power, an elected leader should refrain from agitating, threatening, attacking, coercing or attempting to force people to conform to opinions, policies or practices beyond to what is deemed acceptable.

If there is an undue and perceived excessiveness in applying power, it creates critical situations for the smooth and effective running of office.  For instance, if the President in question is deemed to be authoritarian and coercive, manipulative and abusive, this may create a perception (rightly or wrongly) of a megalomaniac who has little precious time to waste in consulting others; or when consulting others he refuses to accept their opinions or advice and considers that he is always right and, consequently, it is proper for him to dictate the terms of reference.

He exercises power through fear and direct commands. Such an application of power is not only taxing on the individual himself – anxiety, distrust, isolation, burnout etc. – but also on others surrounding him as things get done in haste and resentment. Indeed, it paralyses the machinery of shared decision-making as the “executive orders” which are coming from above in droves, from the president, tend to overwhelm and disable others as despair sets in and leads to confusion, mistakes and disarray.  Despotic leadership leaves a bitter legacy of intimidation, conflict and severe disruption in ongoing social relationships.

In approaching the presidency and its relations with others as a reality show, the president constantly adopts a combative stance and will not shy away from confrontation.  Rather than act in a moderate, sensible, balanced and discreet way he presents and acts like a blunt instrument with the purpose of smoothening out the socio-economic and political landscape of the country.

In the process, he manages to bruise and create world-wide unease and confusion. His interpersonal and social skills are marred by impatience and lack of political tact. It is as though he sees himself as the man to right the plethora of wrongs which plague the country and the world over.

He is desperate to receive recognition, acceptance and applause. In the process, he manages to create the opposite effect and, metaphorically, succeeds in scoring an own goal. His deployment of intimidating and coercive means (verbally abusive epithets and derogatory phrases; his signing of as many executive orders as the number of days he has been president in his effort to make an impression and leave an imprint by wiping out years of previous presidents’ work and agreements; his assault on the intelligence services and the judiciary and his involvement in the Nordstrom ethics affair controversy is unprecedented.

The President’s reality show is based on a loose script of patriotic songs played and performed with a cacophony by the leading part whilst the chorus (the inner circle) chooses to act more like lost souls standing behind the leader in deafening silence but for the occasional stare.

This loose script builds on not just the coerciveness of the leading players but also on blurring the boundaries between informality and formality.  The previous president, Barack Obama, used informality with skill and finesse. He did so eloquently and elegantly and oozed charisma. The new president is a different story.

He cannot claim to have or match those personal traits, personal qualities and presentation which define a charismatic leader.  Rather, his posture, gestures and general body language; his inability to successfully conceptualise his terms, convey clearly and convincingly his thoughts and intentions; his tendency for inconsistency, self-contradiction and his constant repetition of words or phrases often in an emphatic but disjointed and incoherent manner, cannot do anything but add to his woes.  His failure to keep to protocol by following the normal formal and legitimate channels can throw the executive into disrepute and undermine the very social institutions which hold the state together and what is understood to be American democracy.

For example, by openly attacking the judiciary and calling the judiciary political is a contradiction in terms. His position and the very rules and practices of the executive are guided by the same constitution that guides and protects the judiciary.

Challenging and negating the same very social forces which add to his own existence and credence is like throwing the baby out with the bath water.  The judiciary is there to maintain a balance and to guide the legal underpinnings of social relationships, to uphold the constitution and work along and with the constitution. Undermining the judiciary is like cutting off one leg of the tripod (the judiciary, the executive and the legislature) held together by the constitution. The result would be destabilization and a free-fall.

The president’s problems are compounded further still by the over-use of social media. Serious business and ethical matters are best left to formal channels and done through the legitimate but discreet corridors of power. The President’s tendency to shoot from the hip; his narcissism and predilection in acting like a spoiled novice by channeling and trumpeting his own often vitriolic slogans via social media may make good entertainment; it may make big news; it can draw laughs and possibly high ratings as a common “show”.

But it does not make good politics and does not create respect for the highest office in the country.  It attracts resistance, ridicule and contempt.  It puts the machinery of government into disrepute.  The president is not just an individual.  He is the symbol of all things “United States”. How he conducts himself can reflect on the broader perception about the health and international standing of the country itself.

Mr Trump the President must treat his position carefully. He should learn the art of behaving as a president.  He should stop acting out as a President and start acting like a President. Failure to grasp the art of acting like a president of a democracy will bring the reality show to an abrupt and messy end. It will expose political institutions to an acidic reaction and rock the foundations of the fundamental social institutions which hold together and preserve the social system called the United States of America.  The resultant strain and severe fissures which will follow and their subsequent ramifications will be felt well and beyond the “land of the free”.

Our View: A problem-solving president can be unnecessarily costly