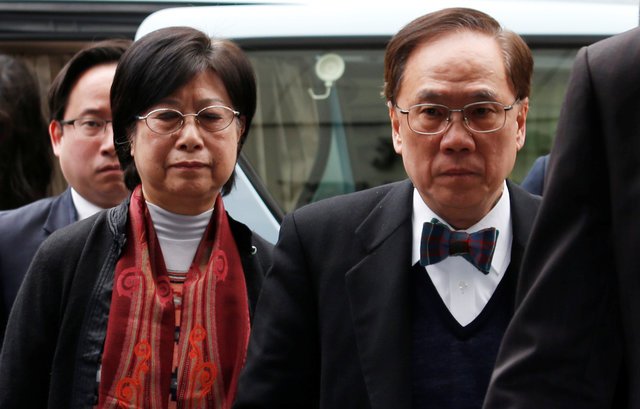 Former Hong Kong leader Donald Tsang was jailed for 20 months on Wednesday for misconduct in public office, making him the most senior city official to serve time behind bars in a ruling some said reaffirmed the financial hub’s vaunted rule of law.

The sentence brings an ignominious end to what had been a long and stellar career for Tsang before and after the 1997 handover to Chinese control, service that saw him knighted by the outgoing British colonial rulers.

“Never in my judicial career have I seen a man falling from such a height,” said High Court justice Andrew Chan in passing sentence.

Tsang, 72, wearing one of his trademark bow ties, was escorted in handcuffs to the court from hospital where he’d been staying since Monday night after experiencing breathing difficulties and chest pains.

The devout Catholic appeared stoic, occasionally closing his eyes as the judge spoke.

Scores of establishment Hong Kong figures, including top former officials and some leading opposition democrats, had written letters vouching for Tsang’s good character and longstanding public service in a bid for mitigation.

Justice Chan said the seriousness of the offence lay in Tsang’s high position as a person of integrity who had breached public trust.

He reduced the sentence by 10 months, saying “it was indisputable that the defendant has dedicated himself to public service in the past 40-odd years”.

Hong Kong returned to China under a “one country, two systems” agreement that ensures its freedoms, including a separate legal system. Its spartan British-built prisons demand strict routines, including light work duties, and offer no special treatment to wealthy or powerful inmates.

The nine-person jury on Friday found Tsang guilty of a charge of misconduct in public office. He had deliberately concealed private rental negotiations with property tycoon Bill Wong Cho-bau while his cabinet discussed and approved a digital broadcasting licence for a now defunct radio company, Wave Media, in which Wong was a major shareholder.

This offence had occurred at the twilight of Tsang’s career, just before retiring in 2012, when reports began surfacing of Tsang’s lavish spending on overseas duty visits, along with allegations of trips with tycoons by private jet and luxury yacht.

Tsang was acquitted of a second misconduct charge.

In a regular column published in the AM730 newspaper before sentence was passed, Tsang said working in the government for 45 years was the “biggest honour of his life”.

“In life, a lot of things are out of our control. But serving Hong Kong was my choice. No matter what the result of the trial is, I have no regrets.”

His conviction adds to a number of scandals ensnaring powerful officials that have marred the city’s reputation as a relatively corruption-free society guarded by a powerful and independent anti-graft agency.

His right-hand man, Rafael Hui, who worked under him for two years as the city’s second highest-ranking official, was sentenced to seven and a half years in jail in late 2014 for receiving bribes from a billionaire tycoon helming Sun Hung Kai , one of Asia’s largest property developers.

After sentencing, Tsang’s wife, Selina, said it was a “very dark day” but that her husband would appeal.

“We are very sad about today’s outcome. But we will face it with strength and courage. We will appeal.”

Former Secretary for Justice Wong Yan-lung praised the man who appointed him for helping uphold the rule of law and pushing democratic reforms despite the risks of antagonising Beijing, according to a letter published by the South China Morning Post.

The head of Hong Kong’s de facto central bank, Norman Chan, said the city wouldn’t have been able to “survive the Asian financial crisis without Donald’s contributions”, referring to Tsang’s decision as Financial Secretary in 1998 to intervene in the stock and futures market to fight off speculative attacks on Hong Kong’s currency.

Tsang’s legal woes look set to continue, however, with the court saying a retrial would be tentatively set for September for another bribery charge on which jurors failed to return a majority verdict.