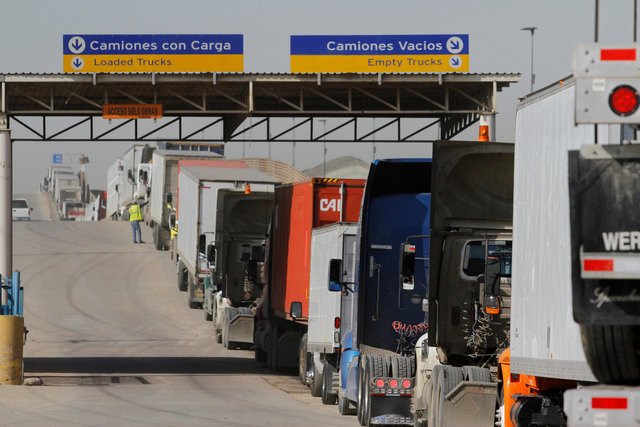 File photo: Trucks wait in a long queue for border customs control to cross into the US at the Otay border crossing in Tijuana

A global agreement to boost trade by cutting red tape and streamlining border checks came into force on Wednesday, promising a 0.5 per cent lift to the world economy by 2030 even as it faces renewed protectionism from the United States.

World Trade Organisation Director General Roberto Azevedo hailed the start of the pact, which he said was the “biggest reform of global trade this century”.

He also sought to play down potentially difficult trade issues with US President Donald Trump who extols an “America First” policy, has complained about “unfair trade” and has suggested he might introduce various tariffs.

The United States is a party to the new WTO agreement, having signed it under the previous administration of Barack Obama.

The WTO, an international forum for resolving trade disputes and negotiating new trading rules, believes its new agreement will cut trade costs by 14.3 per cent on average, and by much more in poorer countries, adding 2.7 per cent to global exports by 2030.

That is estimated to be greater than if trade tariffs were eliminated globally.

The WTO commissioned several studies to estimate the size of the potential boost to exports. One put it at $3.6 trillion, but the WTO uses the more conservative $1 trillion, a figure that Azevedo said he was very comfortable with.

It will primarily be of help in countries, often poorer ones such as in Africa, with records of border delays and inefficient bureaucracy.

Arancha Gonzalez, head of the International Trade Centre, a UN-WTO joint agency that helps companies to export, said exporting would be faster, more efficient and predictable, bringing a boon to small businesses and independent cross-border traders.

“The (agreement) will enable more (smaller businesses) to break out of local and national markets, and tap into regional and international value chains,” Gonzalez said.

The Paris-based International Chamber of Commerce said the agreement’s entry into force was a watershed moment that could support the creation of 20 million jobs worldwide, the vast majority in developing countries.

Agreement of the pact in 2013 was widely seen as a breakthrough moment for the WTObecause it ended more than a decade of stalemate on the moribund “Doha round” of trade talks.

It signalled a more pragmatic approach of achieving what was doable rather than trying to swallow a huge range of agreements in one go. Talks on various different trade reforms are now underway at different speeds.

The agreement needed acceptance by two-thirds of the WTO membership to come into force, and it finally crossed the threshold on Wednesday, with Rwanda, Oman, Chad and Jordan bringing the total to 112 of the WTO‘s 164 members.

The ratifications were a vote of confidence in the global trading system, and it sent a message about the power of trade to create jobs and growth around the world, Azevedo said.

Documents linked to Laiki scandal submitted to the House