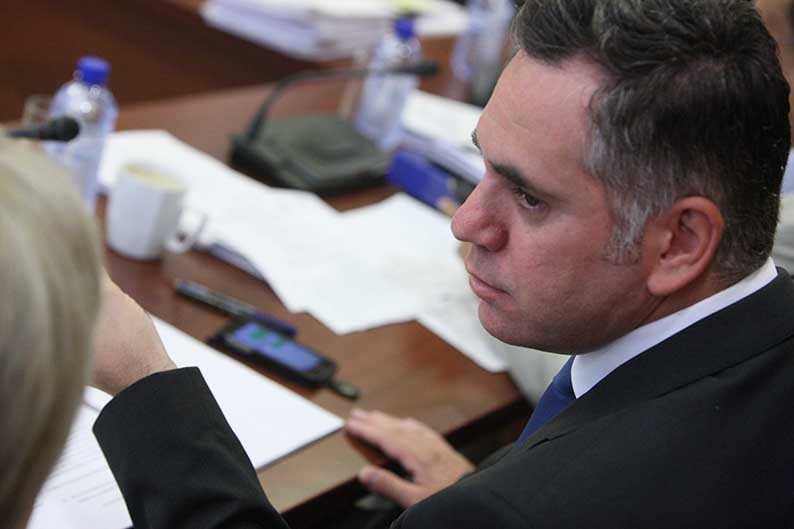 Empty rhetoric: Diko’s boast that its comprehensive plan will tackle all the problems in the economy

Diko leader Nicolas Papadopoulos’ meeting at the Limassol port which included the ports authority officials and the deputy port master was an insult to state institutions and the transport minister himself, the ministry said on Wednesday.

Papadopoulos visited the Limassol port on Tuesday and presided over a meeting at the Cyprus Port Authority’s (CPA) offices to discuss the ports’ problems since the handover to the private operator, Eurogate.

Following the meeting, Papadopoulos called for the resignation of Transport Minister Marios Demetriades over the long delays in loading and unloading of cargo following the handover.

The transport ministry was infuriated by Diko’s announcement on Tuesday that Papadopoulos had presided over the meeting attended by CPA board members, the deputy port master, Eurogate officials, the Limassol chamber of commerce, unions and other affected professionals dealing with the port.

“It is a flagrant insult to state institutions and constitutes disrespect to the Minister of Transport Mr Marios Demetriades.”

The ministry said that it continued to work toward the full normalisation of operations at the port, “with the sole aim to ensure the interests of the state”.

Diko, defending its stance, said that the minister instead of focusing on the serious problems plaguing the port “caused by his incapability, is attacking a party leader who is trying to resolve these problems”.

“Institutions are insulted by those who, with their stance and incapability, insult the public,” Diko said.

Operations at the port are slowly returning to normal following the agreement achieved on Saturday between Eurogate and other stakeholders for a 30-day adjustment period to allow the former to introduce measures to help resolve delays. A committee has also been set up to monitor daily progress and which will update President Nicos Anastasiades.

Eurogate said on Wednesday that since operations resumed on Sunday, it has handled more than 7,000 containers.

“The company’s staff work 24 hours a day in order to accommodate all containers piled up at the port, as soon as possible,” it said.

The rate at which works are processed at the terminal, the company said, “shows that Eurogate is able to respond adequately to market needs and to face effectively any problems arising”.

Our View: Pride and fear of humiliation have trapped both leaders