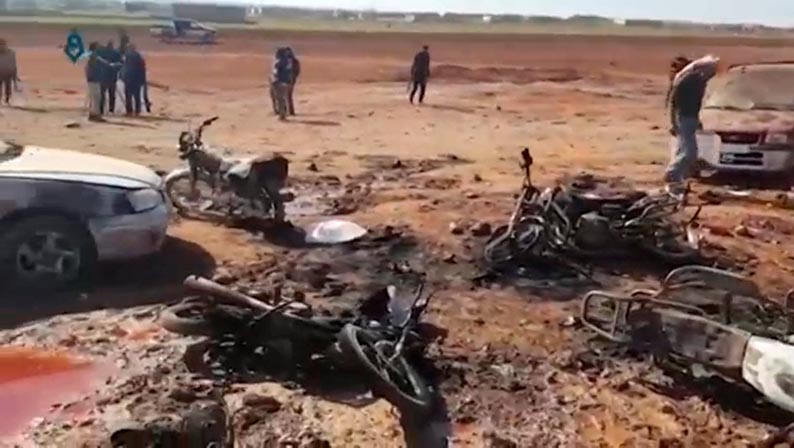 A still image taken from a video posted on social media, shows people inspecting the damage at a site of an Islamic State car bomb explosion

SUICIDE bombers stormed two Syrian security offices in Homs on Saturday, killing dozens with gunfire and explosions including a senior officer and prompting airstrikes against the last rebel-held enclave in the western city.

The jihadist rebel alliance Tahrir al-Sham said in a social media post that five suicide bombers had carried out the attack, which it celebrated with the words “thanks be to God”, but stopped short of explicitly claiming responsibility.

Although the government of President Bashar al-Assad has controlled most of Homs since 2014, rebels still control its al-Waer district, which warplanes bombed on Saturday, said the Syrian Observatory for Human Rights, wounding 50.

The attack comes as government and opposition delegations join peace talks in Geneva sponsored by the United Nations. Tahrir al-Sham opposes the talks and has fought with factions that are represented there.

The head of military security, General Hassan Daaboul, was killed along with 29 others in al-Mohata, while another 12 people were killed in al-Ghouta, the Observatory said. State media gave a lower figure of 32 people killed.

“Five suicide bombers attacked two branches of state security and military security in Homs… thanks be to God,” Tahrir al-Sham said in a statement on the Telegram social network.

Tahrir al-Sham was formed earlier this year from several groups including Jabhat Fateh al-Sham, which was formerly known as the Nusra Front and was al Qaeda’s Syrian branch until it broke formal allegiance to the global jihadist movement in 2016.

Since it was formed, Tahrir al-Sham has fought other rebel groups, including some that fight under the banner of the Free Syrian Army, as well as a faction linked to Islamic State, in northwest Syria. It was critical of FSA groups for taking part in peace talks.