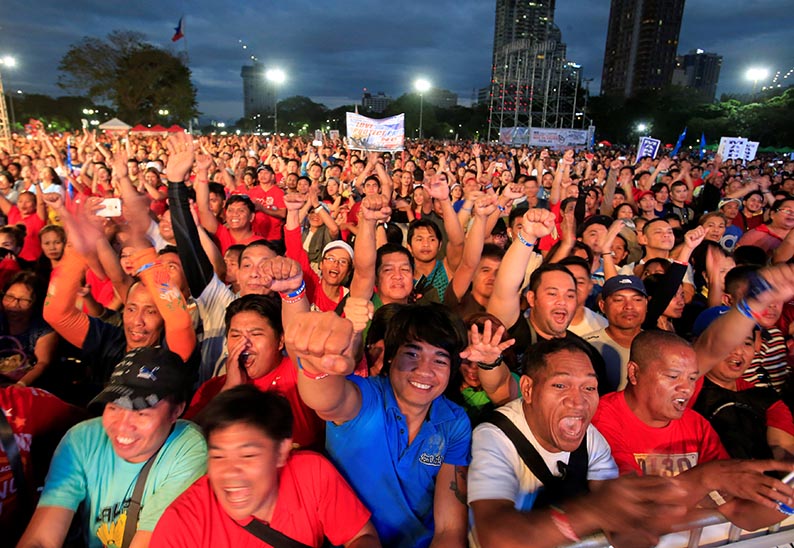 Supporters and opponents of Philippine President Rodrigo Duterte turned a traditional celebration of the 1986 “People Power” uprising into demonstrations for and against his bloody war on drugs.

Former president Benigno Aquino, the only son of Corazon Aquino, the icon of democracy, led about 3,000 protesters gathered at Manila’s historic highway, site of the popular uprising that toppled dictator Ferdinand Marcos three decades ago.

The protesters condemned the deadly narcotics crackdown, which has killed about 7,700 people since the firebrand leader came to power on June 30, claiming they were the victims of extrajudicial killings. The police have denied the allegations.

Later the president’s supporters held a bigger counter-rally at the capital’s main public park, lighting candles and backing the campaign against drugs, crime, corruption and poverty. Police estimated about 200,000 people were at the park.

“Our country is getting better and the criminals are slowly getting rounded up,” said Risa Pedrosa, aged 43, who attended the rally.

“We should back President Duterte all the way and I hope that God will give him good health to continue all these changes to the Philippines. Long live the president,” she told Reuters.

Politicians took turns in delivering fiery speeches at both rallies with local celebrities and rock bands entertaining the crowd. There was a minor scuffle between pro-and anti-Duterte supporters.

The small political opposition said there was a risk of a return to authoritarian rule under Duterte.

“There is a president who is threatening to re-impose martial law and openly support the killings of thousandw of people,” staunch Duterte critic Senator Leila de Lima said in a message from her detention cell, a day after she was arrested for drug offences that she described as a vendetta.

“The grim truth: in the last seven months under Duterte, there were more deaths compared to the 14 years of martial law under the Marcos regime.”

Earlier, hundreds of left-wing activists marched on the main highway in Manila to demand the “genuine change” promised by Duterte, calling for the resumption of peace talks with Maoist-led rebels and the release of more than 400 political prisoners.

Former President Fidel Ramos and former senator Juan Ponce Enrile, hailed as the heroes of the 1986 revolt against Marcos, attended a mass at the main army base in Manila to mark the anniversary, which Duterte skipped.