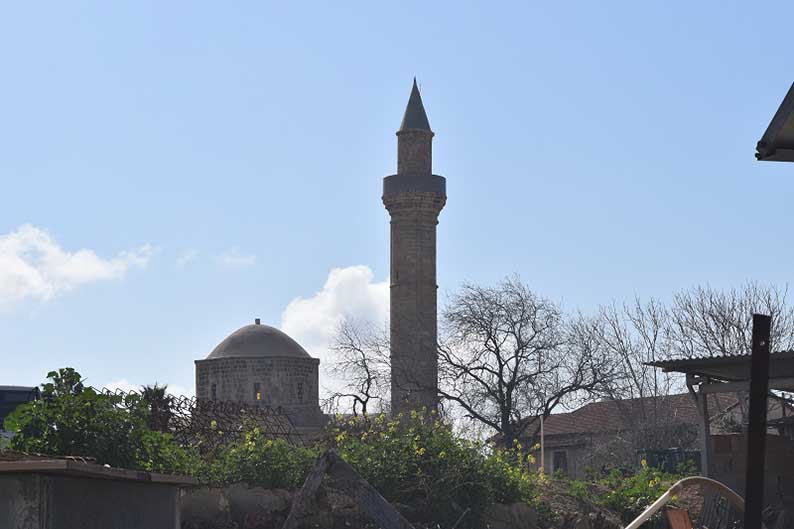 With its legacy of displaced populations, the former Turkish Cypriot quarter of Mouttalos in Paphos has been given a special role in the cultural programme of Pafos2017.

A series of bicommunal events held throughout Paphos’ time as European capital of culture will confront the quarter’s turbulent past which saw most of its original Turkish Cypriot inhabitants move north after the Turkish invasion and their homes given to Greek Cypriot refugees who were forced south.

Found close to the market in Paphos old town, Mouttalos was until recently neglected, its infrastructure left largely untouched for decades.

But now the central square is being renovated, the narrow roads upgraded and a botanical garden created. The remodelling project is costing 2.3 million euros and the square is due to be completed within weeks.

It will then make a fine backdrop for ‘Coming together in Mouttalos’, the package of bicommunal events.

“This is a very special area as it symbolises the past and also the future, which is currently under construction. It is important to us, as it is a way to bridge Greek Cypriot and Turkish Cypriot relations,” said Anastazia Anastasiou, one of the organisers of Pafos2017.

She said the Pafos2017 initiative will highlight the story of the quarter by tracing the narrative of the two communities.

“Greek Cypriot and Turkish Cypriot artists will create installations to reconnect the past and present to bring the two communities closer.”

Austrian artist Victoria Cohen will approach this sensitive issue very carefully, she added, by lighting specific spaces in the area. These will include now defunct phone booths, and courtyards complete with flowers will be used to stage small events.

“This will connect the area with the rest of the city,” she said.

A bicommunal group will also give a theatrical presentation of music, songs and poetry and the department of architecture at the University of Nicosia will present an exhibition of maps and stories using archival material from the area.

“The exhibition will also present stories about Mouttalos and small abandoned objects connected to the quarter and its former inhabitants,” she said.

Another bicommunal event will see Peace2Peace, install around 200 sea pebbles dressed with crochet made by Greek Cypriot and Turkish Cypriot women.

The now mostly elderly residents have welcomed the infrastructural improvements to Mouttalos, though they found the disruption tiresome.

They’re pleased too that what was a forgotten piece of Paphos will have its share of the Pafos2017 limelight. But in one sense the bicommunal themes of the events will not touch them, simply because they live them. They are, in effect, exhibits themselves.

Only a small handful of Turkish Cypriot families remained after 1974 but relations between the two communities are good.

Andreas Georgiou, 86, a Greek Cypriot refugee from Neo Livadi village in Morphou, has lived in Moutallos since 1976, leaving behind two houses and land.

“Here in Mouttalos, I know my Turkish Cypriot neighbours, but there are only a handful, maybe two or three families.”

Georgiou helped to construct Asprokremmos dam in Paphos and proudly speaks a few words of Turkish. He smiles as he remembers the close Turkish Cypriot friends he left behind, who also saved his life.

“My (Greek Cypriot) friends and I were great friends with the neighbouring Turkish Cypriot village. At night we went out to celebrate together and have fun, at weddings we were together, as well. We went to their weddings and they came to ours. One night Eoka B fighters came to kill us and the Turkish Cypriots from the next village came to save us.”

Georgiou, whose son was an MP for Akel, said that the upgrading work and Pafos2017 events are generally a good thing, but won’t have a massive impact on his life.

“It makes things better for us and I like it here but if I have a chance to get my houses back, I will return. I have been back three times, but it’s upsetting. Morphou is my home.”

As he lives facing the Mouttalos square, Georgiou said he will attend events there, but isn’t really interested in Pafos2017.

“Being the cultural capital doesn’t really affect me,” he said

Seventy-six-year-old, Greek Cypriot resident, Myrofora Andrea, is originally from Pano Zodeia village in Morphou. The mother of three moved to Paphos with her husband and children following the invasion.

Although she feels that Mouttalos is her home, her own house in her village is ‘her heart’, she said.

“We came to Paphos for work. My husband’s grandfather was here in Paphos, and we were allocated a house in Mouttalos to live in,” she said.

Andrea found work as a chambermaid in a Paphos hotel. “We had to earn money, we didn’t have anything and we had to work to feed the kids.”

Along with many of the older residents of Mouttalos, Andrea attends the senior citizens’ day care centre, for company and friendship. The centre also offers numerous classes and daily hot meals.

The centre is open to all residents, but none of the few Turkish Cypriots that remain ever visit.

“My neighbours are a Turkish Cypriot family. We get on well and they speak Greek; we are friends, and there are no problems,” she said.

She said that the people of Mouttalos will come together to celebrate the square being finished, adding that it’s good for the community.

“The upgrading work is a good thing, the square, the garden and the events. We are all Cypriot, it doesn’t matter if you pray to God or to Allah,” she said. “It’s not to do with religion, it’s to do with your identity, we are all Cypriot.”