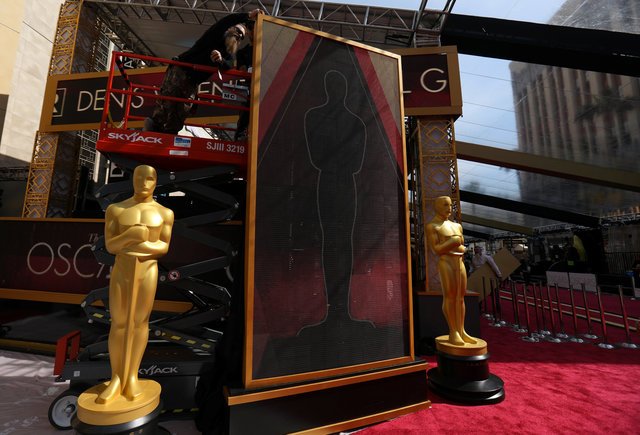 Preparations continue for the 89th Academy Awards in Hollywood

The red carpet has been rolled out and the champagne is on ice for Hollywood’s big night on Sunday, but the biggest question may not be who will win but how much politics will rain on the “La La Land” Oscar parade.

The movie industry’s premier celebration gets underway torn between escapism and reality. The conflict is reflected in the wide range of best picture Oscar hopefuls and an awards season marked by fiery outbursts from Hollywood A-listers towards U.S. President Donald Trump.

With a leading 14 nominations, romantic musical “La La Land” looks set to dance away with an armful of Academy Awards, including best picture, for its love letter to artistic ambition and Los Angeles itself.

“It’s a movie that has a powerful emotional pull and the most emotional movies tend to do best at the Oscars. This one has an infectious enthusiasm and spirit that is irresistible,” said Tom O’Neil, founder of awards website Goldderby.com.

If fantasy prevails, “La La Land,” starring Ryan Gosling and Emma Stone as a struggling actress and jazz pianist, would be the first musical to win best picture at the Academy Awards since “Chicago” in 2003.

“If anything is a dark horse winner on Sunday, it would be ‘Hidden Figures’,” said Variety awards writer Tim Gray.

“It’s a good thing for diversity and it’s doing well at the box office, and that is the really important thing,” Gray said.

A SEASON OF PROTEST

Hollywood however has more on its mind than movie making. After strongly opposing the election of Trump as president, celebrities have used the spotlight at earlier award shows to denounce the president.

Late night talk show host Jimmy Kimmel, who is hosting Sunday’s Academy Awards ceremony, is not expected to go down that road.

“I don’t think it will be very political,” he told trade publication Variety last week of his opening monologue. But “there will be some element of that to the show.”

Yet in a live show, with a worldwide audience of hundreds of millions, there is no telling what dozens of stars may say and do on the red carpet or when collecting their Oscar statuettes.

“I don’t think it’s going to be three hours of bashing Donald Trump. I think there will be a lot of generalities – pleas for tolerance and acceptance,” said Gray.

AWARDS-OSCARS/NOMINATIONS (FACTBOX)
FACTBOX-Leading nominations for the 2017 Oscars
LOS ANGELES, Feb 26 (Reuters) – The 2017 Oscars, or Academy
Awards, the highest honors in the movie industry, will be handed
out on Sunday at a ceremony in Hollywood hosted by comedian
Jimmy Kimmel.
Following is a list of nominations in key categories:

Over 300 missing persons identifications to be reviewed by US lab

Thousands march in Moscow to honour Kremlin critic killed in 2015