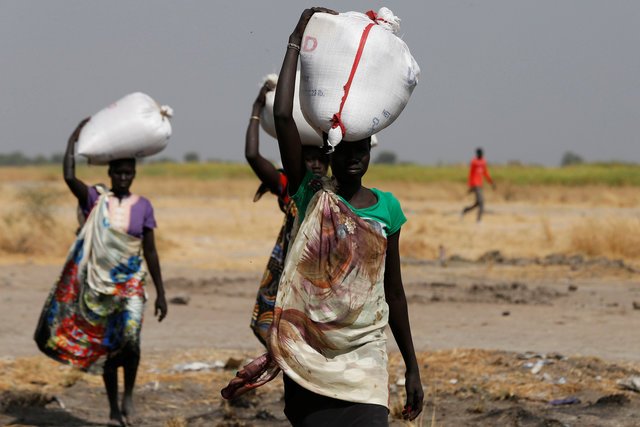 For the first time in six years, there is famine in the world: a real, United Nations-declared famine, with more than 30 per cent of the affected population suffering acute malnutrition and more than a thousand people dying of hunger each day. And there are three more countries where famine may be declared any day now.

As you would expect, all four current and impending famines are in war zones. As you might not expect, one of the afflicted countries is not in Africa. It is war-torn Yemen, the poorest Arab country, whose 22 million people depended on imports for 90 per cent of their food. With most of Yemen in rebel hands and daily air raids, the food is no longer making it in.

But the other three places are indeed African: South Sudan, Somalia and north-eastern Nigeria. The official famine is in South Sudan, where, after three years of brutal civil war, 40 per cent of the population, some five million people, are starting to starve.

As usual, there are other contributing factors. There has been a months-long drought in much of East Africa, and the worst-hit provinces of South Sudan tend to support the rebels and may therefore be suffering from an undeclared government food blockade. But it’s almost always Africa. Why?

There are poor people elsewhere, but apart from North Korea in 1996, every famine of the past 40 years has been in Africa. It’s usually linked to armed conflict, of course, and most of the world’s wars are in Africa, but that just pushes the argument back one step.

Why is Africa, a continent with only one-seventh of the world’s population, home to the great majority of its wars? Only the Arab world, a much smaller region, even begins to compete, and its wars, bad as they are, almost never cause famines. Africa is a global outlier, and there must be some common factor beyond mere politics that makes it the global capital for wars and famines.

The big thing that distinguishes Africa from the rest of the planet (except, once again, the Arab world) is a rapidly growing population: the average fertility rate across the African continent is 4.6 children per woman.

That was about the average fertility rate of the whole human race in 1960, when the entire world’s population was exploding. But the global fertility rate has halved since then, while Africa’s has stayed much the same. If it remained at this level for the rest of the century, today’s one billion Africans would become seven billion, and half the human race would be African in 2100.

In fact the fertility rate is forecast to fall gradually in most African countries, although some countries – Niger, Mali and Uganda, for example – will continue to have higher birth rates. But the fertility rate is falling very slowly: the forecast is that by 2045 the average African woman will be having only three children – but anything above 2.2 children per woman means the population is still growing.

The forecast of the United Nations Population Division is that Africa’s population will almost quadruple by the end of the century, while most other countries stand still or even fall in population. That means there will be 3.6 billion Africans by 2100 – a third of the human race. It also means that war and famine may be their constant companions.

It’s not that Africa has already outgrown its food supply. There is probably enough good land in Africa to feed twice the present population (though not four times as many people). Global warming is likely to damage the productivity of African agriculture quite badly in the long run, but that’s not happening yet. So why is there a famine problem now?

It’s because for the past half-century Africa’s population has been growing as fast or faster than its economies. Most Africans therefore stay poor, and poor people, especially the rural poor, tend to have higher birth rates. And since they cannot afford to invest much in their farms, in their children’s education, or in anything else, the problems and the conflicts deepen and fester.

It’s almost forgotten now, but when most African countries got their independence from the European empires in the 1960s their citizens were significantly better off than those of most Asian countries. African countries had better communications; even their diets were better.

Africa is having famines long before there is an actual shortage of food in the continent. It’s having wars that are essentially over the division of the spoils (like South Sudan) in economies where there is simply not enough wealth to go around. Unless it can somehow get its population growth under control, it will just go on getting worse.

Validity of a will

US and European politics, struggle goes on behind closed doors