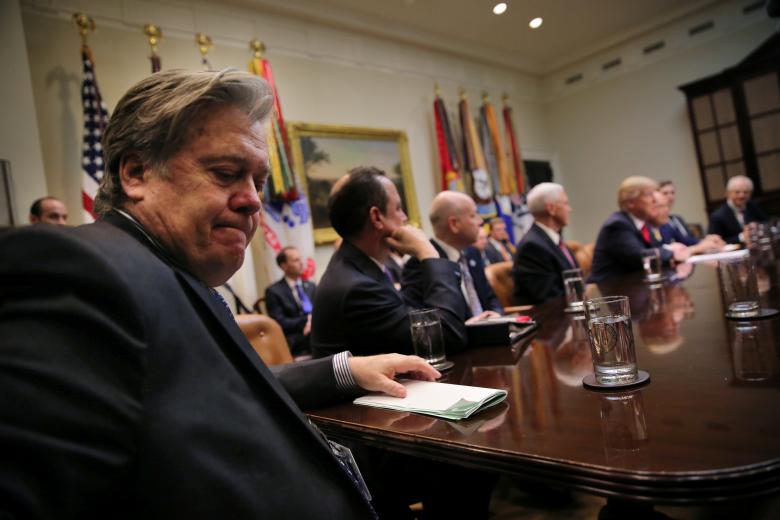 Europeans like to call the British and their former white colonies – the United States, Canada, Australia and New Zealand – the “Anglo Saxons”. No matter that all these states now have an ethnic mix, in which descendants of the Germanic tribes of Angles and Saxons who settled in England are increasingly outnumbered by people with no such origins. The name sticks.

It sticks, especially in France, to define a political-social culture: in favour of free markets and trade, liberal in matters of speech and publication, individualist rather than communitarian. Alexis de Tocqueville wrote in “Democracy in America” – a key “Anglo Saxon” text – that “the Anglo-American relies upon personal interest to accomplish his ends and gives free scope to the unguided strength and common sense of the people”.

The free scope allowed to the common sense of the people has spoken, in the United States and the UK. It wasn’t “unguided”: especially in the United States, most news media guided the vote towards Hillary Clinton, and elite opinion, though not the popular press, guided the Brits away from Brexit. But the guidance didn’t work: the anti-elitist, populist insurgencies prevailed.

And that it did has a harsh impact on the administrative classes. It is another boast of Anglo-Saxonia that its political culture has produced state administrators dedicated to neutral service of their political masters. They may attempt to steer policies regarded as reckless into safe channels: a 1980s BBC sitcom, “Yes Minister”, drew its laughs from the devious maneuverings of the top mandarins. But the politicians often won: submission to elective democracy trumped bureaucracy.

Neutrality has its limits. Those who lead administrative departments in domestic and foreign policies tend to be centrist and liberal, wedded to process, programs and predictability. Thus the Trump invasion of Washington has been for the U.S. administrative class largely frightful, while the Brexit vote in the UK has affronted the liberal and much of the centrist Conservative establishment, of which the upper civil services are often part.

In Britain, the insurgents are from within, if only just. The three ministers charged with delivering a successful disengagement from the EU are Foreign Secretary Boris Johnson, Brexit minister David Davis and Secretary of State for International Trade Liam Fox: all past challengers for leadership of the Conservative Party, all turbulent, argumentative men mostly of the right. (Davis is a strong civil libertarian.) Their responsibility for re-orienting the international posture of the UK, for which they were hardly prepared, caused the early resignation of Sir Ivan Rogers, ambassador to the EU, who was caustic in his resignation about his political masters’ “muddled thinking”, calling on his staff to continue to oppose “ill-founded arguments” and not to fear to speak truth to power.

In the more closeted British system, much is still subterranean. But what had been sacrosanct is no longer. David Cameron’s proudest boast, that he had retained foreign aid at 0.7 per cent of GDP, higher than most other wealthy states, now looks shaky: Priti Patel, the Secretary of State for International Development, had once called for the department to be scrapped, and appointed a strong critic of the high spending, Robert Oxley, as her special adviser.

The head of a large NGO which works with the department told me that the officials there are uncertain of present commitments and future spending. A high-level commission had warned in 2015 that Britain’s diplomacy was already constrained to concentrate on “narrow British interests”. If the worst forecasts of economic shocks to come – the UK economy has been resilient, and some experts see that continuing – then British interests will narrow further, with civil servants and diplomats forced into unaccustomed roles – or out.

But it’s in the United States where the drama outpaces anything television or political satire can offer. News in Europe and the United States often comes out of the busy thumbs of President Trump, and he and his insurgents take few prisoners. Cerberus Capital Management founder Stephen Feinberg may head a review into the intelligence agencies which, given the president’s belief that they are leaking against him, is likely to be harsh.

The new administration goes on as it began. In January the president fired acting Attorney General Sally Yates for refusing to implement the ban on entry to the United States from seven Muslim-majority countries because she was not “convinced that the executive order [was] lawful”. White House Press Secretary Sean Spicer said that State Department employees opposed to the order should “either get with the program or they can go”.

Plenty are unlikely to stick around in the Trump era – at the Department of Energy, where global warming has been accepted as urgent while in the White House it’s considered rubbish. In Citizenship and Immigration Services, if the more extreme programmes on deportation are followed through. And in the intelligence services, if a review seeks to diminish them.

Revolutions are messy affairs. Of the three thought “great” – the French, Russian and American – only the last has remained potent, its values still exported, disturbing for autocrats. Now, some of the revolutionary precepts which de Tocqueville celebrated are on the block of counter revolution, and with them parts of the administrative class.

John Lloyd co-founded the Reuters Institute for the Study of Journalism at the University of Oxford, where he is senior research fellow. Lloyd has written several books, including “What the Media Are Doing to Our Politics” and “Journalism in an Age of Terror,” published this month by I. B. Tauris. He is also a contributing editor at the Financial Times and the founder of FT Magazine.

Famine is back, but why always Africa?

Schools would never teach the true tragedy of Enosis