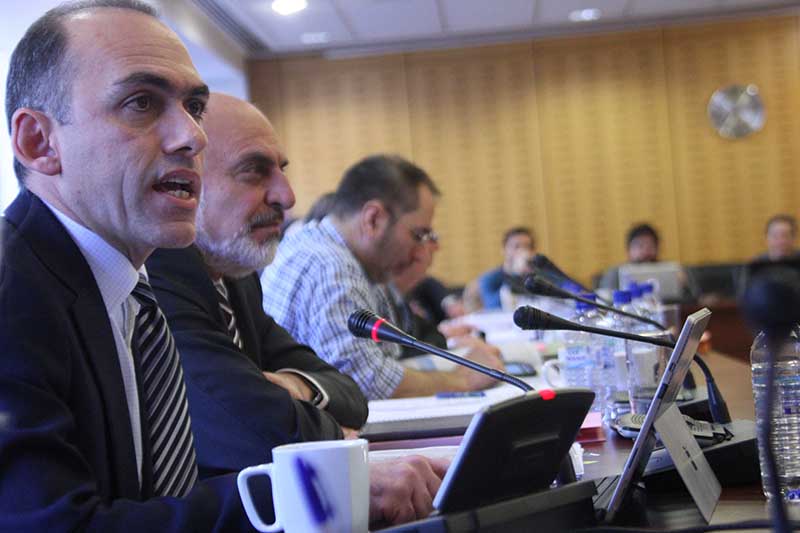 Georgiades speaking in the House this week

Finance minister Haris Georgiades was in a defiant mood this week as he appeared on radio shows and in the legislature to explain his big disagreement with the European Commission’s country report on Cyprus. The minister, however, focused on the part of the report that warned of a possible overheating of the economy and recommended expenditure cuts and raising taxes, while ignoring all the points about the slowing down of reforms and the failure to tackle the long-term problems of the economy such as high debt.

There was no way the government would raise taxes as this would stifle growth, which was of paramount importance at present, said the minister. He also pointed out that the sound, 3 per cent growth rate achieved in 2016 was not a one-off based on a big deficit and high public spending or easy credit as had been the case in the past. It had been achieved with a balanced budget, which he considered a big achievement considering the state of the economy a few years ago.

More importantly, neither the IMF nor the Eurogroup shared the Commission’s view of an overheating economy, the minister said, adding that the government would increase revenue by clamping down on tax evasion rather than through tax hikes. We have been hearing promises about a clampdown on tax evasion from governments for decades, but the problem never goes away, which would seem to suggest it is easier said than done. For now, however, Georgiades would use this pledge as a response to the Commission’s recommendation for higher taxes, as no government imposes higher taxes in the 12 months before a presidential election, unless it has no other option.

Engaging in economic jargon about the structural deficit cited by the Commission and claiming the output gap had not been factored in to calculations, the minister conveniently avoided discussing many of the more worrying points made in the country report. It said the growth potential “remains weak, constrained by limited implementation of structural reforms to support investment.” Growth was also stifled by high NPL ratio combined with subdued investment and stagnant productivity. As a result unemployment remained high at 13.3 per cent in 2016 and risks of poverty were high.

The government had no answer because the Commission was absolutely right about the loss of reform momentum. This was a mild way of putting it because the truth is that the reform agreed with the troika during the adjustment programme has all but ground to halt and the bad habits of the past are gradually re-appearing. Should we mention the hiring of 3,000 full-time soldiers last November, the abandoning of the privatisations programme, the failure to reform the public service and control the growth of the public payroll?

While these failures could be blamed on the opposition parties which blocked the passing of the relevant bills from parliament, the impression given was that government was very happy with the outcome as it maintained the old order, with unions and parties staying firmly in control of the country. With presidential elections just 12 months away, the government is now considering keeping in existence loss-making SGOs that offer nothing, such as the Grains Commission and the Organisation of Agricultural Insurance (OGA), despite having decided to close them down.

Last week President Anastasiades and Georgiades met representatives of farming organisations and told them they would consider their demands to keep these organisations going. The Grains Commission, which employs 60 people at an average annual wage of €80,000 has accrued losses of €15m in the last four years. As for OGA, it is one of those absurdities that could only exist in Cyprus – in 2017 its revenue from insurance cover payments would be €2.2m but its costs (operations, wages and pensions) would €2.5m leaving it no money to pay a single insurance claim. These organisations will be kept alive by the government because there are elections next February.

The reality is that as soon as Cyprus exited the adjustment programme last March, the Anastasiades government gradually shelved most of its memorandum commitments, happy to blame the opposition parties that refused to approve them. And things will only get worse for the medium-term prospects of the economy as we enter an election year and Anastasiades plans his re-election drive. It would be interesting to see what Georgiades would do in such circumstances. Would he step down in order preserve the sterling reputation he rightly earned as a prudent and capable finance minister or would he stay in the government and keep boasting about the 2016 growth rate (which was greatly helped by the government’s citizenship for investment campaign and a bumper tourist year) while ignoring the Commission’s warnings because his boss has reverted to the old profligacy?

Ideally he should stay but heed the advice and warnings of the Commission which can be trusted much more than a president seeking re-election.

Tales from the Coffeeshop: Prez Nik electioneering from the moral high ground

Waning trust in Anastasiades by Turkish Cypriot side