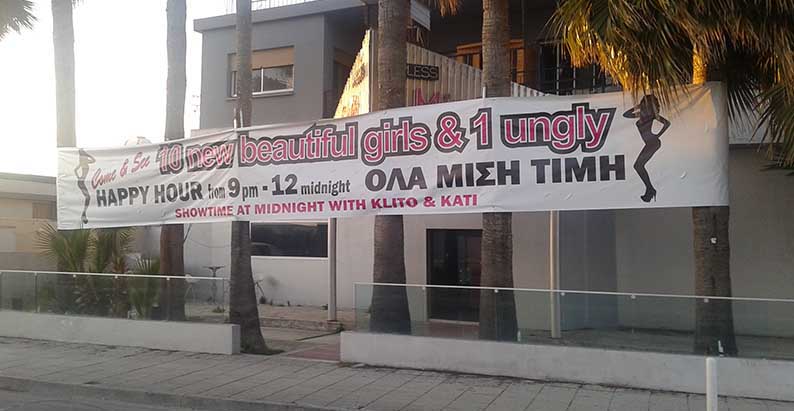 The sign outside the club in Limassol. the phrase in Greek reads, 'everything half price'

The owner of a Limassol gentleman’s club has denied that an ambiguously worded sign outside his premises suggests that the women who work there are selling ‘half-price’ sex, and the police have been forced to agree.

Mirage Topless gentlemen’s club is located on the main coastal road in Limassol’s tourist area and has been brandishing a huge poster outside its front doors which reads “Come & See – 10 new beautiful girls & 1 ungly” (sic).

“Happy hour from 9pm-12 midnight. Everything half price. Showtime at midnight with Klito and Kati.”

According to the head of NGO Cyprus Stop Trafficking Androulla Christofidou, this is not the first time this has happened.

“A few years ago, a friend took a picture of a similar poster at Mirage and we sent it to the police chief. The next day the poster was gone, I think it had been ripped up, but after some time a similar one went up.”

Klitos, the owner of Mirage who did not want to share his last name, told the Sunday Mail nothing of the sort had ever happened.

“There’s nothing wrong with this,” he said.

Klitos said only the drinks, the show and the dances were half price during ‘happy hour’.

The wording has been cleverly phrased, as even a police spokesman, upon hearing what the poster reads said: “you and me understand there’s something offensive. The words themselves don’t imply something. Happy hour (everything at half price) could mean drinks.”

But Christofidou said the poster clearly implied that “women are sold here.”

According to Josie Christodoulou, a policy coordinator specialising in human trafficking at the Mediterranean Institute of Gender Studies, this advertisement sent a message that “women are for sale and promotes human trafficking”.

Klitos said this was not the case. “All our girls are European. They’re allowed to be here. The times have changed.”

He was referring to Cyprus’ dark history where until as recently as 2014, the island was on the Tier 2 Watch List of the US State Department’s trafficking in persons’ report. The last report in 2016, saw Cyprus bumped up to Tier 1.

“Since the artiste visa was scrapped, 90 out of 108 cabarets that existed in 2012 in Cyprus have shut down,” Christofidou said.

In 2009, the artiste visa which encouraged sex trafficking to the island was scrapped only to be replaced with the title of ‘performing artist’.

“But this doesn’t fix the problem” Christodoulou said.

Therefore if a women engages in prostitution on her own, she does not break any law. But if she has to share her profits with someone, then this is illegal.

According to Christodoulou, the law only punishes the perpetrator if they purchase services from someone they suspect may be a victim of human trafficking.

As this is evidently a grey area and proving whether someone may have believed the woman in prostitution was a victim or not may be difficult, a proposal has been submitted to parliament to make it illegal to buy services from a human trafficking victim – whether the purchaser was aware or suspected the woman’s conditions or not, Christodoulou added.

“I hope this article is going to be a comical one,” said Klitos, before launching into a description of another sign near his club.

“A few years ago someone posted on the internet a picture of a ‘drive through’ sign we have outside, and people found it really funny. They would ask if we had a drive through service.”

He had no qualms about discussing the 20-year history behind his business.

Six years ago, Klitos served a three-year prison sentence after he was found guilty of profiting from prostitution.

“They took me to court 11 times on those charges. The 12th time, they found me guilty and they put me in prison,” said. He insisted the case was a setup and the woman who testified against him had been bribed, but it ripped his family apart.

“I love and respect women. Why should the government impose what a woman can and can’t do with their body? A person has a right to do what they want if it’s their will.”

Apollon edge closer to the top