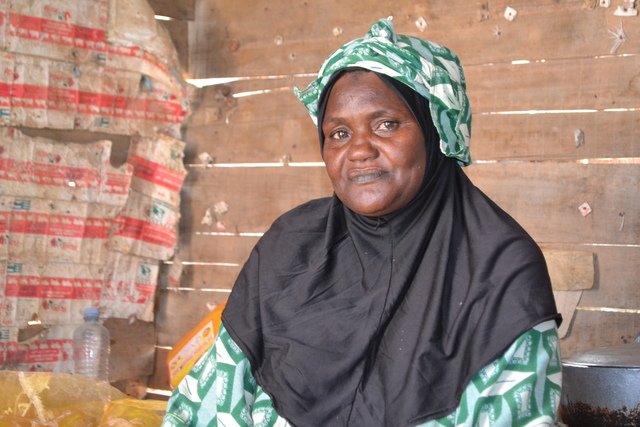 Aichetou Samba at her home in Nouakchott, Mauritania

Salimata was always told she should be proud to come from a family of wife beaters.

“You’re the daughter of a woman whose husband broke her hands. Your grandmother’s legs were fractured by her husband. You must be loved,” Salimata said, citing her mother’s words.

The 19-year-old woman from Mauritania’s Soninké ethnic group, married to a man who also beats her, said she taught herself to believe what her mother told her.

“I felt like an animal that had to be disciplined,” she said. “As time passed, I came to believe that my husband beats me only when he is at the peak of his love for me.”

Mauritania, a poor, mainly Muslim nation, has deep social and racial divides, each group with its unique marriage norms.

While divorce is widely accepted among the majority Moors, it is almost impossible among the Mauritanians of African descent such as the Soninké and Fulani.

And while domestic violence is frowned upon among the Moors, of Arab and Berber descent, it’s seen as an act of love and a accepted practice for Soninkés, said social researcher Sidi Boyada, an advisor at the ministry of social affairs.

Aichetou Samba is a 60-year-old Fulani grandmother who lives in a modest house in a Nouakchott neighbourhood.

“In the past, our girls used to get married at eight years of age, and they usually married their cousins,” she said, coddling one of her grandchildren.

Mauritanian law stipulates “sanity” and “marriageable age” as preconditions for getting married, leaving the door open for early marriage by giving parents the right to decide.

Wearing a colourful scarf that shows her Fulani heritage, Samba smiled and said: “A Fulani woman always takes pride in being beaten by her husband,” and often shares her experiences with other women to show off his love for her.

“This is one of our traditions,” she said. “We see wife-beating as a common and normal practice, which sometimes includes pouring cold water on the wife’s body.”

“MY LEGS WERE BROKEN”

Sociology professor Ousmane Wagué at the University of Nouakchott, also a Fulani, said Mauritanian women of African descent accept being beaten to avoid divorce, convincing themselves their husbands’ violence is a sign of love. “As the popular song goes: My legs were broken and I stayed home,” he told the Thomson Reuters Foundation.

Mariem Jallo, a 25-year-old Fulani woman, is an exception. She has been divorced for five years.

“My husband used to constantly beat me. He passionately loved me but this didn’t stop him from hitting me for very trivial reasons,” she said.

Jallo, who is fond of soap operas, said her husband came home one day while she was watching television and hit her. Minutes later, he tried to make it up to her, saying he couldn’t bear to see her preoccupied with something other than him.

Her husband tried to block the divorce and her family blamed her for the failed marriage, she said.

Alyoun Idi, a 27-year-old Fulani man, said he had beaten his wife many times because she disobeys him, adding that this never affected their relationship.

“I love my wife so much and I can’t live without her but we inherited this from our ancestors, which is part of our traditions,” Alyoun said. “(Beating) is also a great resolution for many family disputes.”

Domestic violence against women was criminalised in 2001, and under Mauritanian law, wife-beating is a crime punishable with up to five years in prison.

Ahmed Bezeid ould Almamy, a lawyer who works with women’s rights groups, said he receives an average of five complaints every month of women reporting abuse by their husbands.

But prosecutions are rare as women often drop charges for fear of sending their husbands to jail or getting divorced, he said.

However, lengthening queues outside the offices of women’s rights organisations suggest a waning tolerance for violence against women, campaigners say.

The Household Women’s Association recorded more than 2,000 complaints in the first half of 2016, compared to 1,700 complaints in 2014, according to Aminetou mint Al Mokhtar, head of the association.

“New legislation is underway blocking the way for the withdrawal of complaints against violent husbands to protect the public interest and punish anyone who is also involved in covering up for crimes against women,” Ramdhane told the Thomson Reuters Foundation, without giving a timeframe.

Despite efforts to pursue and prosecute violent husbands, some Mauritanian women continue to endure battering.

Crime slightly down in Polis compared with five years ago, minister says