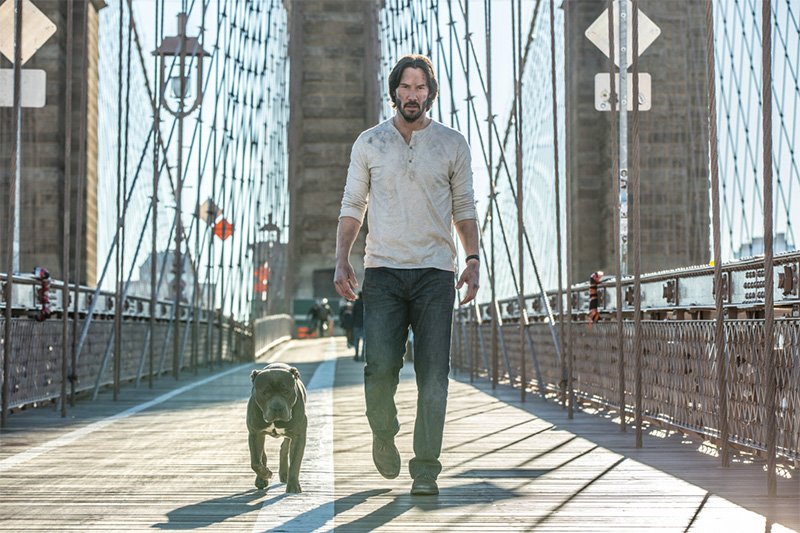 John Wick (Keanu Reeves) has a new dog. Not as cute as his old dog, it’s true – this one’s a chunky beast with a bulldog gait and, significantly, no name – but at least it shows that he’s willing to go back to normal life, drawing a line under all the mayhem that was sparked by the slaying of that previous puppy (they should never have killed his dog!). All that remains is to get his car back from Russian mobster Abram Tarasov, which admittedly involves some destruction. Cars smash into cars, people’s heads smash into cars, a car wheels around and swipes a thug, sending him flying into a wall – and meanwhile the film keeps cutting to Tarasov (Peter Stormare) in his office, looking increasingly concerned as he listens to the bangs and squeals and crashes. It’s quite funny.

John Wick: Chapter 2 is often funny, and stylish, and great to look at. For a while, it easily outstrips the lumpy original, which was rather too self-consciously pared-down – but the gaps between the good bits grow longer, and the final act is just wall-to-wall killing. Faced with such systematic carnage in the style of a videogame, the standard response is to praise the ‘choreography’ – but it’s not like these fight scenes are shot in a single virtuoso take, like the opening of La La Land; they’re just big, and increasingly monotonous. The amusing detail doesn’t disappear altogether: there’s a splendid bit where Wick and another hitman walk through a crowded mall – too crowded for all-out warfare – firing little surreptitious rounds at each other, like sulky schoolboys flashing rude gestures behind the teacher’s back. Ultimately, though, Chapter 2 is slightly disappointing.

It should’ve been played as deadpan comedy, and some of it is. The whole notion of the Continental – a luxury hotel offering respite to criminals and assassins, as long as they play by the rules – is delightful, especially with Ian McShane as the well-spoken manager (he calls Wick ‘Jonathan’). Wick himself is a comedy figure, in a way, the inscrutable super-killer who kicks, shoots and punches with the weary mien of a butcher cutting steaks. (Reeves, with his famously blank equanimity, is the perfect actor to play him.) Wick is a legend, a bogeyman. What’s so special about this car? a minion asks Tarasov in that opening sequence; “It is John Wick’s car,” replies Tarasov and the minion just says “Oh…”, looking slightly green around the gills. Wick speaks every language, and is all things to all men. Wick is unkillable. You can stick your gun right up against his midriff and pull the trigger – and a red patch of blood duly appears but Wick just walks away a bit unsteadily, like he’s stubbed his toe on a paving stone.

Action as subterranean comedy sounds potentially cool. Action as style also sounds cool. There’s a formalist impulse to define action films in terms of space and movement and eye-popping colours (it may have taken off in the late 80s, with the super-stylish Hong Kong actioners directed by John Woo and Tsui Hark) – and John Wick: Chapter 2 boasts some delectable images. A dying woman lies half-submerged, viewed from above, and the pools of blood from her slashed wrists billow and swirl in the water, looking like butterfly wings. A quick shot of Wick in a crowded subway, drenched in flashing blue light, is unexpected and beautiful. It almost doesn’t matter that the plot is thin, with Riccardo Scamarcio as a suave Mafioso who forces Wick out of retirement then double-crosses him. Plot seldom matters in this kind of movie, so long as the pleasures keep coming.

Yes – but in this case they don’t. The fights take over, gruelling and joyless. Laurence Fishburne adds a mouldy cameo as ‘The Bowery King’. A glittering hall-of-mirrors climax is admittedly gorgeous, but what happens in front of the mirrors isn’t very interesting. It becomes increasingly hard to humour the movie’s gun fetishism and outrageously high body-count, while its elegant minimalism (even the title is minimalist) starts to look like a lack of ideas.

Above all, Wick himself grows a little tedious, the joke wearing thin; it’s a fine line between a killing machine and a good-looking vacuum. “I’m not that guy anymore,” he protests at one point, trying to refuse the Mafioso’s commission; “You’re always that guy, John,” comes the reply – and it’s true, he never changes. It’s unclear how this limited hero can be stretched out enough to accommodate John Wick: Chapter 3 – but the only sure thing is that a threequel is coming (unless this sequel flops dismally), the blatantly open ending makes it inevitable. That new dog had better sleep with one eye open, if you ask me.

A celebration of Aphrodite