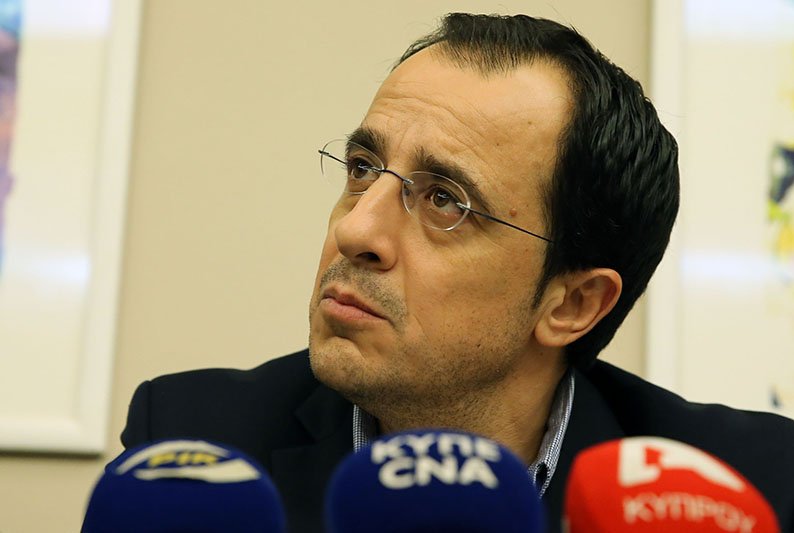 President Nicos Anastasiades on Tuesday sent a letter to UN Secretary-General Antonio Guterres with his own account of why reunification talks have been put on hold.

At the same time, the government was placing responsibility for the deadlocked talks squarely on the Turkish side.

“What we are seeking from the UN is an objective and accurate record of what has happened,” government spokesman Nicos Christodoulides said, explaining the purpose of the president’s missive.

According to state broadcaster CyBC, which cited diplomatic sources, the letter spanned “three or four pages” and expanded on three main points: the Turkish side’s responsibility in “raising unacceptable demands” as early as the Geneva conference on Cyprus last month, its search for any excuse to derail the talks, and Turkey’s refusal to resume the international conference in March, as agreed earlier.

The Greek Cypriot side, Anastasiades reportedly told Guterres, had ample opportunity to exhibit similar behaviour, using any pretext to abandon the talks, but opted not to.

Instead, Anastasiades once more professed his readiness to resume negotiations, both bilaterally and at the international conference in Switzerland.

A meeting meanwhile was being planned for this week between the president and UN Special Adviser Espen Barth Eide.

The Greek Cypriot side views this meeting as highly important, the spokesman said.

Talks came to a halt after a contentious law pushed through the Greek Cypriot parliament by nationalist party Elam, making the commemoration of a 1950 vote to join Greece compulsory in schools.

Reacting, Turkish Cypriot leader Mustafa Akinci said he will not return to the negotiating table with Anastasiades until the government “corrects the mistake.”

But speaking on CyBC radio, the government spokesman suggested this was merely a tactical manoeuvre on Akinci’s part.

“I agree, this [parliament’s decision] was wrong and the timing was poor, as it gave the Turkish side a pretext to interrupt the talks,” Christodoulides said.

“I repeat, the president is ready to resume talks immediately. The objective is to continue negotiations. We are in a promising procedure after 22 months of talks, there are results, significant progress has been achieved and it would be wrong for this effort to be deadlocked.”

The spokesman shrugged off the notion that Anastasiades has got cold feet on the peace process and has shifted his focus on the presidential elections of February 2018.

This narrative, he claimed, originated from within Turkey.

“In a bid to conceal their inability to negotiate, the Turkish side has been attempting for some time now to put the blame on the president, claiming that he has started campaigning for the elections.

“The president has a lot of things on his plate, he is not entering into an election campaign, and besides not even society wants this.”

Unfortunately, he added, this criticism of Anastasiades was being repeated on the domestic front.

Asked about the president’s recent public interventions on the National Health Scheme and the muddle at the port of Limassol, the spokesman said these are part of the normal course of business.

“Is the president or the government not supposed to deal with issues because of elections which are a year away?” he mused.

Rather, the onus should be placed on the Turkish side for trying to scupper the process by demanding that Turkish nationals should receive the same four freedoms as EU citizens after a solution, that is, freedom of movement of people, goods, services and capital.

And, Christodoulides argued, it was apparent that Turkey was putting the brakes on the Cyprus talks until after the constitutional referendum in Turkey, in mid-April.

“This is not our own assessment, it is the assessment of Brussels as well as of foreign governments which have contact with Ankara and whose officials were recently in Turkey.”

A new Geneva summit on Cyprus discussing security and guarantees had been tentatively placed for mid-March.

But according to Christodoulides, Turkey is reluctant to cite an exact date for the summit.

“This was conveyed to us by the UN,” he said.

But he was at a loss to explain why Akinci had agreed to the joint statement for a new summit.

The spokesman said the government was adopting  a wait-and-see posture until the outcome of the referendum in Turkey.

But he demurred on a question as to whether there was enough time this year to reach a settlement, given that following the Turkish referendum in April, Greek Cypriots would enter election campaign mode.

“If you ask me, and this is my personal opinion, the election campaign here should not start before autumn,” he offered.

Meanwhile the tit-for-tat continued with the Turkish government urging Anastasiades to come clean on his intentions.

“If Anastasiades does not wish to continue [with the talks], let him say so, so that we can finish this job,” said Turkish Foreign Minister Mevlut Cavusoglu, according to a convenience translation of remarks he made to Milliyet newspaper.

“Let him show now that he is wants a solution, let him be bold. As for us, should the negotiations fail, we will sit down with the ‘TRNC’ and take a decision. No decision has been made as of now.”

In an analysis piece, Politico predicted that Turkish president Tayyip Erdogan would harden on the Cyprus issue until the constitutional referendum, as he needs the supports of nationalists in Turkey.

However, the magazine pointed out, even if Erdogan were to secure the desired outcome in the referendum, there are doubts as to whether he will soften his stance subsequently.

“Erdogan will still be mindful of his post-referendum popularity — especially as the country faces down a potential economic crisis,” Politico wrote.

“More importantly, the additional presidential powers the referendum would grant him will only be secured after another round of elections, meaning there is a very real risk of early elections — and a real need for him to maintain the support of nationalists.”

Trump’s speech to Congress is a chance for a reset