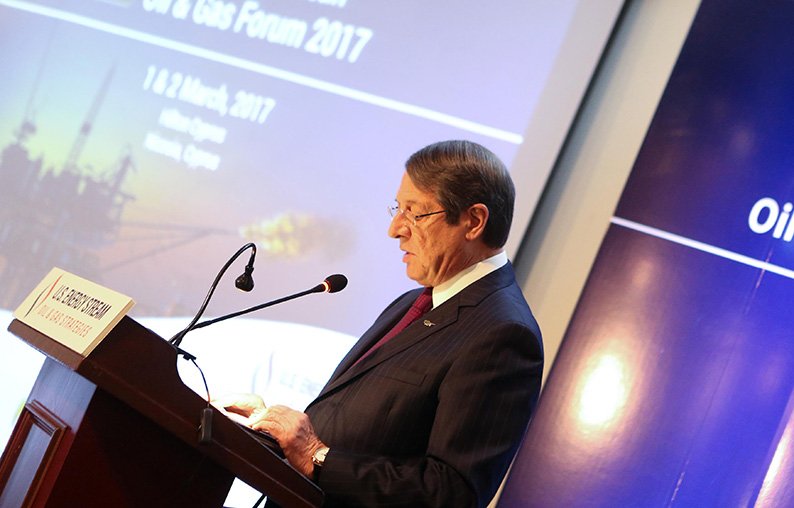 Monetising the Aphrodite gas field is a top priority for the government, which based on expected future gas finds is also looking at options, including a liquefaction terminal at Vassilikos, President Nicos Anastasiades said on Wednesday.

In his speech at the 8th Mediterranean Oil and Gas Forum in Nicosia, Anastasiades presented the government’s strategy for the development of the hydrocarbons sector, which includes improved cooperation among the region’s countries.

Referring to the Aphrodite field, the president said it represents a top priority with the energy ministry in talks with the consortium to draft a development and production plan as soon as possible.

At the same time, he added, commercial talks with potential buyers in Cyprus and Egypt for long-term contracts are equally important.

Such talks are ongoing and the most viable option is a regional pipeline to Egyptian liquefaction facilities, either at Damietta or Idco, the president said.

“Of course, it must be noted that, on the basis of expected future discoveries, the government of Cyprus is also examining various other scenarios of commercial development, including a liquefaction terminal at Vassilikos,” Anastasiades said.

Noting that French energy giant Total plans to conduct exploratory drilling in block 11 of Cyprus’ exclusive economic zone within the year, while the ENI/Kogas consortium plans to continue its exploratory programme, Anastasiades said that “it is becoming increasingly evident that the Cypriot hydrocarbons sector in the last two years has gained fresh momentum”.

“This is especially true after the promising results of the third licensing round, during which, despite the challenging investment climate in the hydrocarbons industry, we have received applications for the three available plots from companies of the highest calibre,” the president said.

“We expect these plots to be licensed very soon, and that the companies will set an aggressive exploratory schedule,” Anastasiades said.

According to the president, Cyprus’ regional policy has traditionally placed a very high premium on creating an environment of stability and mutually beneficial cooperation.

“To this end, we are convinced that economic cooperation can also strengthen political trust, which comprise the necessary preconditions for successful cooperation in the field of hydrocarbons,” he said.

Anastasiades added that Cyprus hopes that the promise of prosperity can help create peace and stability in the region.

“I have the strong belief that, through respect for international law and national sovereign rights, all countries in our region and beyond, including Turkey, can benefit from cooperation and the creation of an environment of stability, which can secure energy investments in the billions,” he argued.