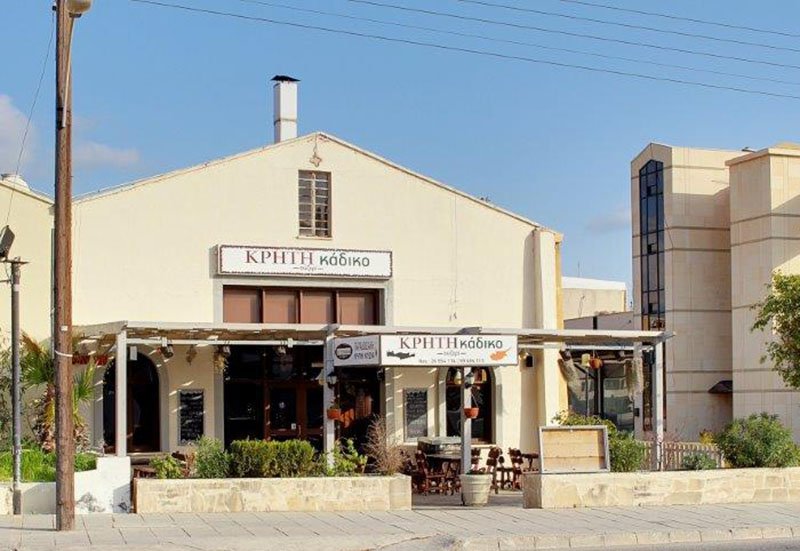 Greece holds many food memories for me, tiny cheese pies with honey from Crete, terrific tomato fritters from Santorini, a whole sea bream fried in garlic sauce from Rhodes. Sadly the Greece I enjoyed when younger has suffered over recent years so when I heard a genuine Cretan tavern had opened in Paphos and was dedicated to bringing the flavours of that beautiful region to town, initially I went as an act of solidarity, expecting little from the rather drab entrance way.

Cretan born owner and chef Yannis Doulgerakis explained that he calls his establishment an Ouzeri, which for the unenlightened means a tavern which sells Ouzo as well as mezedes, and Yannis also insists that everything served on his plates has to be from the freshest and most authentic ingredients, boosted by the weekly delivery of Cretan herbs and cheese, plus Cretan olive oil from some of the island’s 35 million olive trees.

If you come to Crete Kadiko to eat you will be able to experience what is a distillation of thousands of years of culture and lifestyle; it’s a very rustic, essentially domestic, culinary tradition with special virtues all of its own, and the starter served certainly set the standard for the rest of our meal. Dakos (Ntakos) is a form of Greek bruschetta but based on barley rusks (paximadi) and these rusks are first soaked in water or olive oil to soften them, then they are topped with grated fresh tomato and mizithra, which is the creamy sheep or goats milk cheese, then drizzled with Cretan virgin olive oil and dusted with salt, oregano and pepper.

This dish alone will have me returning as it was a true delight.

A Cretan salad followed, and again the flavours just zinged around your mouth, which was also regularly rinsed by quaffing from tankards of quite decent home-made wine. Diners can opt to go for a Cretan or a Mediterranean mezze or just pick a selection of dishes from the menu, but it would seem a waste to not dive into the delights of fava meatballs, tomatoes stuffed with tuna, Cretan sausages along with pork, or lamb, or the delights of Apki, a sausage meatball with soft and semi hard cheese served with potatoes and salad.

Vegetarians are certainly well served with plates of steaming fresh spinach or a tasty beetroot salad with garlic, yogurt and roast nuts. There is also a selection of seafood, with octopus and stuffed squid and shrimp saganaki, even a sea urchin salad, which had to be a first for me. Back to the olive oil and Yannis, like so many other chefs, says that a good tavern/ouzeri/restaurant must use top quality olive oil and the rest of the cooking comes second. And believe me, the oil used here is the sort of stuff you want to dab behind your ears such was its subtlety and depth of flavour.

Chef obviously has a passion for his homeland’s cheeses and we tried Graviera, which is loose rendition of the word Gruyere, a hard cheese with a lovely afterbite and Myzitra, which is made from ewe’s milk and tastes a bit like an expensive French chevre frais. I could go on and rave about the chicken livers in savoro sauce or the Sfakiani Pita with fennel known as Marathopita but words cannot do true justice to this country’s food. I can only say there is nothing showy about how the ingredients are brought together, yet there are oceans of traditional techniques at work on every dish so only at the end of the meal will you recognise how well you have been fed and how tasty each and every morsel was.

Ex-CIA spy held over kidnap avoids extradition from Portugal, will be freed